Mexican Street Corn – Made Two Ways: On The Cobb & Off The Cob

This Mexican Street Corn recipe is a common Mexican street food that is made by grilling corn on the cob and then coating it with a sauce made up of mayonnaise, sour cream, cotija cheese, chile powder, and lime. In my version here, I made it two ways – (1) On The Cob and (2) Off The Cob In a Skillet. They are both delicious and ready in less than half an hour. 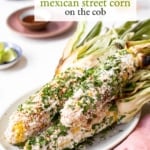 Also called elotes, this easy to make Mexican Corn On The Cob Recipe is a perfect appetizer or side dish for any outdoor gathering. Whether you turn it into a Mexican Corn Salad or a Mexican Pasta Salad, it deserves a spot in your arsenal of Mexican Food Recipes.

With Cinco de Mayo coming, I am super excited to spend more time outdoors and more importantly start grilling. And what is better than celebrating the arrival of spring with delicious a true Mexican classic. If you are a lover of Mexican food like I am, you are in for a treat.

What Is Street Corn

Also referred to as Mexican elote, Mexican food corn, street corn, or Mexicorn on the cob, essentially it is corn on the cob smothered with a sauce made by using a mayo-sour cream mixture and sprinkling it with cotija cheese and fresh chopped cilantro.

It is considered as one of the most popular street foods in Mexico. Here in the US, it is served in popular restaurants like Chili’s, California Pizza Kitchen, and sometimes even in Whole Foods’ salad bar.

Think of my recipe here as a copycat version of the Mexican elote you enjoy in those restaurants.

For most Americans (and us), it is one of those addictive foods to treat your friends and family for summer cookouts. You can easily serve it by itself on the cob with a stick or in a cup, as a side dish with steak tacos or an appetizer with tortilla chips.

Regardless of how you serve, the combination of charred kernels smothered in a tangy sauce is guaranteed to please.

In the first method, I am grilling fresh summer corn on the cob that you can easily find in warmer months.

And in the second one, I am cooking corn off the cob (aka cut corn – fresh, frozen, or canned) in a skillet, which you can do during the colder months.

I wanted to provide you with two different ways of cooking elote so that you can easily make it all year round.

Intrigued? Let’s break it down, first starting with the ingredients to make street corn, and then, with step by step instructions as to how to make it at home.

You need two sets of ingredients. The first one is your choice of corn (fresh, canned, or frozen). And the second one is the sauce ingredients.

What Kind Of Corn Should I Use

During the warmer months, I use fresh summer corn. You can shuck the corn and grill it on the cob, or cut it off the cob and cook it in a skillet.

During the winter months, if I can’t find fresh corn, I use canned (drained and rinsed) or frozen corn (no need to thaw). Now, before anyone sends me angry emails, I will tell you: True Mexican elotes are traditionally made with fresh corn.

However, if you don’t mind breaking a few culinary rules, using canned or frozen corn allows you to enjoy it even when it is snowing outside and grilling is not an option.

The ingredients for the Mexican corn sauce:

Toppings to put on Mexican corn are:

The process is making grilled Mexican corn is pretty easy and it is as follows:

If you are not familiar, Cotija cheese is the traditional Mexican cheese that is used in the Mexican Street Corn recipe. It is a salty cow’s milk cheese that is often used in sauces in Mexican cuisine. Most grocery stores nowadays carry Cotija in their specialty cheese section. (source)

If you can’t get your hands on Cotija, you can substitute it with feta cheese or parmesan. Though for a truly authentic Grilled Mexican Street Corn, I recommend using cotija. I think it is worth the additional effort.

Alternatively, you can use corn off the cob (aka cut fresh corn), canned (drained and rinsed) or frozen corn, and sauté it in a skillet with a little bit of oil or butter. I make Mexican Skillet Corn during the winter months when it is too cold to grill outside.

It is also sort of a deconstructed way of serving Mexican street corn similar to they do in Mexico when they serve it in a cup.

In addition to being a great alternative to make in the winter months, this seasoned off the cob version is much easier to eat, especially if you are indoors.

A Few Helpful Notes on The Recipe

By Aysegul Sanford
Yields: 6 servings
Prep Time: 15 mins
Cook Time: 15 mins
Total Time: 30 mins
This Mexican Street Corn recipe is a common Mexican street food that is made by grilling corn on the cob and then coating it with a mixture made up of mayonnaise, sour cream, cotija cheese, chile powder, and lime. Also called elotes, this easy to make Mexican Corn On The Cob Recipe is a perfect appetizer or side dish for any outdoor gathering. In my version here, I made it two ways – (1) on the cob and (2) off the cob or in a skillet. They are both delicious and ready in less than half an hour. 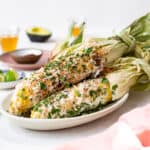 For Grilled Mexican Street Corn on The Cob:

Can I make Mexican corn ahead: While I am a big of freshly grilled or sauteed corn, you can make this dish a day in advance. Simply cook the corn (using one of the methods mentioned) and keep it in an airtight container in the fridge. Prep the elote sauce and keep it in the fridge as well. Assemble right before serving. How To Store Leftovers: While this Mexican street corn dish is best on the day it is served, as long as it is kept in an airtight container it would still be fresh on the next day. Seasoning: If you are like me, enjoy your food on the saltier side, feel free to add in a bit of salt into the sauce.

This website uses cookies to improve your experience while you navigate through the website. Out of these cookies, the cookies that are categorized as necessary are stored on your browser as they are essential for the working of basic functionalities of the website. We also use third-party cookies that help us analyze and understand how you use this website. These cookies will be stored in your browser only with your consent. You also have the option to opt-out of these cookies. But opting out of some of these cookies may have an effect on your browsing experience.
Necessary Always Enabled
Necessary cookies are absolutely essential for the website to function properly. This category only includes cookies that ensures basic functionalities and security features of the website. These cookies do not store any personal information.
Non-necessary
Any cookies that may not be particularly necessary for the website to function and is used specifically to collect user personal data via analytics, ads, other embedded contents are termed as non-necessary cookies. It is mandatory to procure user consent prior to running these cookies on your website.
SAVE & ACCEPT
4264 shares