These gluten-free carrot coconut cupcakes are sweetened with maple syrup and bananas. They are flavored with warm spices like cardamom, cinnamon, and all-spice. Although the cream cheese frosting turns them into delicious and pretty cupcakes, they are moist enough to be served without the frosting just by themselves as muffins. 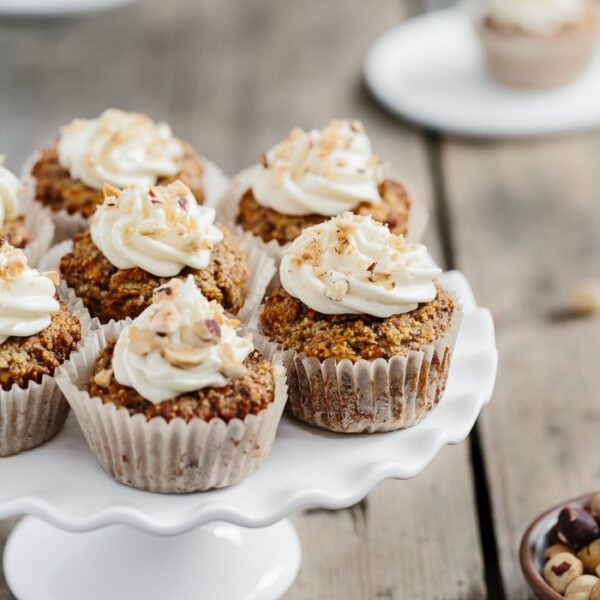 For over a few weeks, I have been doing some spring cleaning on the blog by going through some of my old posts to see which ones need an updated. Embarrassingly, back when I first started blogging in 2013 I had no idea what I was doing. I didn’t know much about writing recipes or taking photos that will make people want to make that recipe.

Now 4 years later, I learned so much that I feel like it would be better if I were to go back and give a face lift to some of the old recipes that I know to be 100% foolproof and delicious.

These maple sweetened coconut carrot cupcakes recipe is one of those recipes. It was first published back in 2014. Since then it has been my favorite carrot cupcake recipe.

I love it because (1) it is sweetened with maple syrup and banana and (2) it is so different than your usual carrot cake muffin/cupcake recipe. As you’ll see in the recipe below, the batter is flavored with cardamom, cinnamon, and allspice. The flavor combination of carrot, banana, and maple syrup mixed in with those spices create a surprisingly delicious batter. One that I go back every time I need a carrot cupcake recipe.

The frosting is made with cream cheese mixed in with a little bit of maple syrup and lime juice. The addition of the frosting truly takes this recipe to another level making it a delicious cupcake. However, if you want to omit the frosting and just serve it as muffins you could totally do so. They are so moist that they would be perfectly fine just by themselves.

The old post, photos, and writing are below. You will see in the old photos that I sprinkled them with pistachios. Unfortunately, I didn’t have access to pistachios so I used hazelnuts, but you can use any nut you like. Either way, these carrot coconut cupcakes are a total show stopper, and still to this day, a recipe that I make very often.

It is raining like crazy outside as I am typing this blog post. Virgin Islands are getting their share of the rain caused by the tropical depression Bertha. Though most of the time, hurricanes and tropical depressions are very serious and scary, since I know that Bertha is one that is not as dangerous, I am enjoying the dark, stormy, and windy weather outside. As soon as I am finished with writing this, I am going to spend the rest of my Saturday afternoon reading my book with a cup of tea accompanied by one of these cupcakes.

I first made these cupcakes a couple of days ago to take to a dinner party that we were invited. Knowing that one of the friends in the party has celiac disease and therefore cannot eat gluten, I wanted to make something that she could enjoy as well. And Dwight has been asking for a carrot cake for some time now. I thought it would be nice if I could find a gluten-free carrot cake recipe and make it take with us.

They ended up being delicious and very popular so much so that all the ladies in the party asked for the recipe.

The best part of these cupcakes is that they are not only gluten-free but also they are guilt-free. Because the “flours” used in this recipe are made up of ground almonds, chickpea flour, and shredded unsweetened coconut. Instead of using granulated sugar, you use maple syrup, shredded carrot, a mashed ripe banana flavored with spices like cinnamon, cardamom, and all spice. Then you top it off with a frosting made with cream cheese, honey, and limejuice.
After you sprinkle it with chopped pistachios they are simply irresistible.

By Aysegul Sanford
Yields: 12 muffins
Prep Time: 20 mins
Cook Time: 30 mins
Total Time: 50 mins
These gluten-free carrot coconut cupcakes are sweetened with maple syrup and bananas. They are flavored with warm spices like cardamom, cinnamon, and all-spice. Although the cream cheese frosting turns them into delicious and pretty cupcakes, they are moist enough to be served without the frosting just by themselves as muffins. 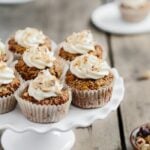 This website uses cookies to improve your experience while you navigate through the website. Out of these cookies, the cookies that are categorized as necessary are stored on your browser as they are essential for the working of basic functionalities of the website. We also use third-party cookies that help us analyze and understand how you use this website. These cookies will be stored in your browser only with your consent. You also have the option to opt-out of these cookies. But opting out of some of these cookies may have an effect on your browsing experience.
Necessary Always Enabled
Necessary cookies are absolutely essential for the website to function properly. This category only includes cookies that ensures basic functionalities and security features of the website. These cookies do not store any personal information.
Non-necessary
Any cookies that may not be particularly necessary for the website to function and is used specifically to collect user personal data via analytics, ads, other embedded contents are termed as non-necessary cookies. It is mandatory to procure user consent prior to running these cookies on your website.
SAVE & ACCEPT
1240 shares