Ina Garten’s Baked Cinnamon Donuts recipe is just the most delicious breakfast with your coffee or treat with your afternoon tea. Make this simple donut batter, bake it in a donut pan and drizzle it with a quick vanilla glaze for a delicious homemade baked donut recipe. 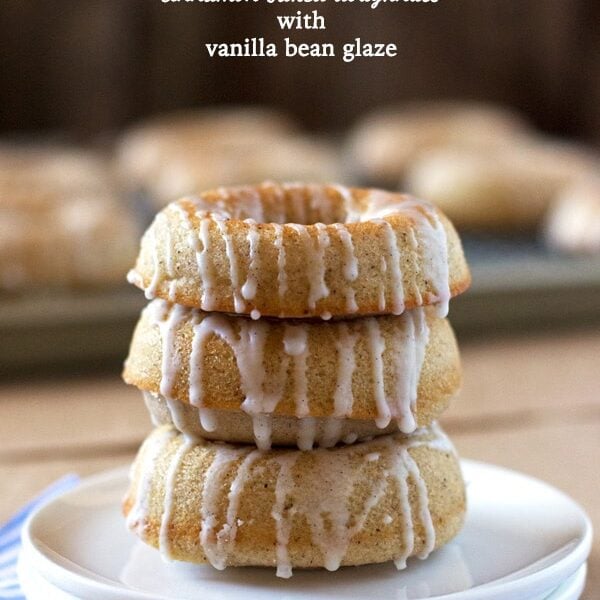 The day I received my new Donut Pan (affiliate link) in the mail, my husband, Dwight, asked me if I could make something for a “guys-only” barbecue party that he wanted to go to. I took it as a sign from above and decided to use this as an opportunity to finally make these Cinnamon Baked Doughnuts with Vanilla Bean Glaze that I’ve been wanting to try.

I was relieved because if I had made them just for us, there was a strong possibility that I would eat them all by myself!

As they were baking in the oven and the sweet smells of cinnamon and sugar filled my house, I started to feel like I was losing all of my well-intentioned dieting inhibitions.

Believe me, you guys – I hate to admit it, but I am definitely capable of eating 16 doughnuts all by myself. Especially these ones.

When these Cinnamon Baked Doughnuts came out of the oven, all rational thought went out the window as I decided my mouth was somehow heatproof and dug right in, unable to wait for them to cool before I taste-tested them.

Just look at these! If you could smell the mouth-watering aroma at the moment, I’m sure you’d understand – and have a burnt tongue too!

I mean, really – how can one be expected to be rational when these are on her kitchen counter??!!?

Other Baked Goods That You Can Serve for Breakfast

By Aysegul Sanford
Yields: 16 donuts
Prep Time: 15 mins
Cook Time: 17 mins
Total Time: 32 mins
Ina Garten's Baked Cinnamon Donuts recipe is just the most delicious breakfast with your coffee or treat with your afternoon tea. Make this simple donut batter, bake it in a donut pan and drizzle it with a quick vanilla glaze for a delicious homemade baked donut recipe. 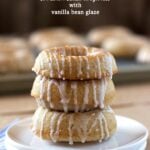 For The Donut Batter

For The Vanilla Bean Glaze

This website uses cookies to improve your experience while you navigate through the website. Out of these cookies, the cookies that are categorized as necessary are stored on your browser as they are essential for the working of basic functionalities of the website. We also use third-party cookies that help us analyze and understand how you use this website. These cookies will be stored in your browser only with your consent. You also have the option to opt-out of these cookies. But opting out of some of these cookies may have an effect on your browsing experience.
Necessary Always Enabled
Necessary cookies are absolutely essential for the website to function properly. This category only includes cookies that ensures basic functionalities and security features of the website. These cookies do not store any personal information.
Non-necessary
Any cookies that may not be particularly necessary for the website to function and is used specifically to collect user personal data via analytics, ads, other embedded contents are termed as non-necessary cookies. It is mandatory to procure user consent prior to running these cookies on your website.
SAVE & ACCEPT
68 shares