Brioche French Toast for a scrumptious breakfast that is guaranteed to impress. Learn everything you need to know to make the best French toast that is crispy on the outside and soft on the inside with my foolproof tips. Drizzled with homemade caramel sauce, this French toast recipe will be your next weekend treat. 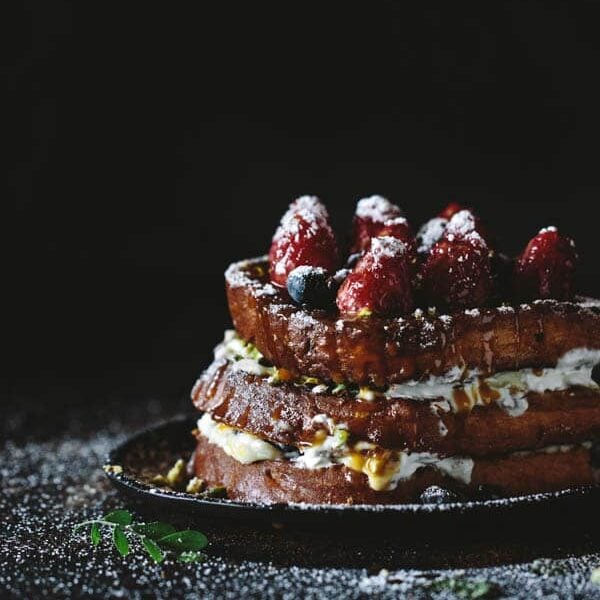 Last Sunday morning, after eating the quick French toast that I made with the challah leftover from the previous evening, Dwight suggested that I share this recipe on my blog. I had made my mom’s classic French toast recipe by dipping the bread in a mixture made with eggs, sugar, cinnamon, and milk. As you can see, it is nothing too exciting, just simple French toast. Frankly, I did not think of this recipe as one that is worthy of sharing with my readers.

However, I was intrigued. I decided to do a little research and see how others were making their French toast. Between you and I, I was secretly hoping to find a foolproof recipe that I could claim to be the best.

After several hours of surfing on the internet and reading through my favorite cookbooks, I came to the conclusion that the homecooks of our generation have gotten far more sophisticated with their French toast recipes than my mother’s. It was apparent that I could definitely improve on that recipe, and make it in a way that is worthy of sharing here on the blog.

As I read through these sources, I took notes and spent the next 2 mornings testing them in my kitchen. At the end of those 2 days and after eating more than our fair share of slices of French toast, my husband and I thought that we could claim this to be the best French toast recipe ever.

So here is what I learned:

1. Choose a type of bread high in egg and fat:
I found that most French toast recipes use bread that is high in egg and fat content. Breads like Challah (Jewish egg bread made with eggs and oil), or Brioche (French yeast bread made with eggs and butter) are the two most popular ones. It is commonly agreed that using these kinds of bread produces a more custardy and creamy end result.

2. Bread should be dry:
Everyone seems to agree that the bread you choose should be dry (or stale) to absorb as much of the milk mixture as possible. However, the most common way of drying the bread was to leave it out (covered with a clean kitchen towel) for a day or two on the counter, and let the air do the work.
Though I had done this in the past, I love the method that America’s Test Kitchen uses. They simply bake the bread in a 300-degree oven for 15 minutes, flipping halfway through the baking process. This way the water in the bread completely evaporates in a much quicker way.

3. Add more fat in to the milk mixture:
As I read through blog posts and recipes, I realized that the most commonly used term for the milk mixture was “creamy”. Almost everyone was looking for a way to make it creamier. And the way to do that was to increase the fat content by adding some melted butter into the milk mixture.
I can’t say that this was a surprise to me, as we all know butter makes things taste better, but for this instance, I thought that it really added a new layer of flavor to the end product.
That being said, I saw some recipes that used vegetable oil instead. I will try this next time and will let you know how it turns out. However, I doubt that it will make it taste better than the version with butter.

One very important note here – If you add the melted butter to cold milk, it may curdle. You can prevent that by warming up the milk in the microwave for a minute or so.

4. Go for a custardy French toast rather than an eggy one:
Another thing that I learned from America’s Test Kitchen was to increase the amount of milk (by half a cup) by eliminating the egg whites. To be quite honest, I wouldn’t mind the eggy taste, but I loved the additional custardy consistency that this minimal change produced.

Last but not least, most recipes, especially the ones that were written by food bloggers used seasonal fruits and sauces to enhance the flavor of the French toast. I suspect that they did this to make it look more seasonal and appealing.
In my case, as you can see in the pictures, I went a little overboard with this part. I stacked them up with layers of Mascarpone cheese and sprinkled it with pistachios, and topped them off with some berries and caramel sauce.

Though I promise you, this French toast still tastes very good just by itself and/or after it is drizzled with a little bit of warm maple syrup.

By Aysegul Sanford
Yields: 8 Slices
Prep Time: 15 mins
Cook Time: 30 mins
Total Time: 35 mins
Brioche French Toast for a scrumptious breakfast that is guaranteed to impress. Learn everything you need to know to make the best French toast that is crispy on the outside and soft on the inside with my foolproof tips. Drizzled with homemade caramel sauce, this French toast recipe will be your next weekend treat. 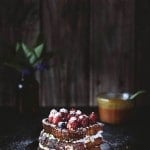 The French toast part of this recipe is adapted (with changes) from Cook’s Illustrated magazine.

This website uses cookies to improve your experience while you navigate through the website. Out of these cookies, the cookies that are categorized as necessary are stored on your browser as they are essential for the working of basic functionalities of the website. We also use third-party cookies that help us analyze and understand how you use this website. These cookies will be stored in your browser only with your consent. You also have the option to opt-out of these cookies. But opting out of some of these cookies may have an effect on your browsing experience.
Necessary Always Enabled
Necessary cookies are absolutely essential for the website to function properly. This category only includes cookies that ensures basic functionalities and security features of the website. These cookies do not store any personal information.
Non-necessary
Any cookies that may not be particularly necessary for the website to function and is used specifically to collect user personal data via analytics, ads, other embedded contents are termed as non-necessary cookies. It is mandatory to procure user consent prior to running these cookies on your website.
SAVE & ACCEPT
408 shares