Oxtail Gratin aka Oxtail Mac and Cheese: A scrumptious pasta dish made by mixing baked oxtails with bechamel sauce and pasta and baking it in the oven for perfection. This is your usual mac and cheese recipe taken to a whole new level. A great recipe when you are feeding a crowd. 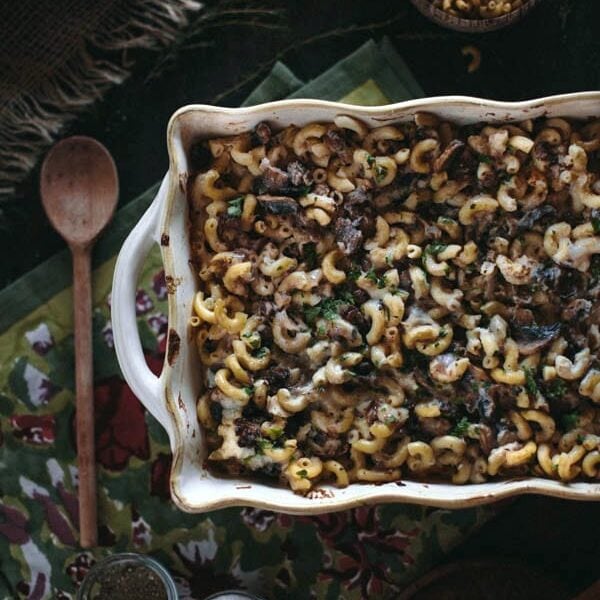 I have to admit – I have never cooked or intentionally eaten oxtail before. I knew that most people use it while making beef stock due to its high bone content, but I had never attempted to cook with it until I made this dish. With that being said, I have been thinking about making something with it for a while, as it is very popular and (shockingly!!?!) always available in the supermarkets of our small island, Virgin Gorda. I was told by some of the locals that oxtail is a popular meat type frequently used in Caribbean cooking, mostly in stews.

This Oxtail Macaroni Gratin recipe that I found in Mimi Thorisson’s new cookbook, A Kitchen in France

, came in at a perfect time while I was looking for a creative way of making mac and cheese. It felt like shooting two birds with one stone.

If you are like me, and had never cooked with oxtails before, they come from the tails of cattle, a well-exercised muscle that is marbled with fat and high in jelatin-rich bone content. They release a ton of flavor when cooked for a long time, and therefore they are best for braising. Just like this recipe, a lot of French meat dishes use oxtail while creating a flavor base.

I have to say – this Oxtail Macaroni Gratin is like Mac and Cheese on “steroids”. It is a great alternative when you are looking for a way to make the good old mac & cheese more interesting and somewhat luxurious. It certainly is a crowd pleaser and perfect for a winter meal.

This recipe has 3 components. This first part is cooking the oxtails. After being flavored with shallots and onions, they are cooked in red wine for 3 hours, or until tender. You are more than welcome to cook the meat a day in advance, especially if you are short on time. In fact in my opinion, it is best to do that, as the meat gets better as it rests.

The second part is making the béchamel sauce. Mimi’s original recipe doesn’t have mushrooms in it, but I had some in the fridge and thought that it would be a nice addition. However, if you want you can omit mushrooms. Béchamel sauce in this recipe serves like glue made with butter, flour, milk, and chicken stock holding everything together while adding an additional layer of flavor.

The last component is putting everything together. To do that, all you have to do is to layer the meat (with its sauce), cooked elbow shaped macaroni, cheese, and béchamel sauce in two batches, and bake it in a 400-degree oven for 20-25 minutes. In the original recipe, Mimi suggests using the juices of the meat (after being reduced) as gravy on the side, but I chose to use all of it in the gratin.

Whether you want to impress your friends, or you are looking for a way to transform a classic, this Oxtail Macaroni Gratin is a great way to go. It sure is more complicated (and time consuming) than a regular mac & cheese dish, but certainly more rewarding. Not to mention, it is a perfect meal on a cold winter evening…

By Aysegul Sanford
Yields: 8 servings
Prep Time: 30 mins
Cook Time: 4 hrs
Total Time: 4 hrs 30 mins
Oxtail Gratin aka Oxtail Mac and Cheese: A scrumptious pasta dish made by mixing baked oxtails with bechamel sauce and pasta and baking it in the oven for perfection. This is your usual mac and cheese recipe taken to a whole new level. A great recipe when you are feeding a crowd. 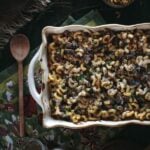 For the béchamel sauce:

Note: You can substitute Beaujolais with a bottle of Pinot Noir, Chianti, or Burgundy.

This website uses cookies to improve your experience while you navigate through the website. Out of these cookies, the cookies that are categorized as necessary are stored on your browser as they are essential for the working of basic functionalities of the website. We also use third-party cookies that help us analyze and understand how you use this website. These cookies will be stored in your browser only with your consent. You also have the option to opt-out of these cookies. But opting out of some of these cookies may have an effect on your browsing experience.
Necessary Always Enabled
Necessary cookies are absolutely essential for the website to function properly. This category only includes cookies that ensures basic functionalities and security features of the website. These cookies do not store any personal information.
Non-necessary
Any cookies that may not be particularly necessary for the website to function and is used specifically to collect user personal data via analytics, ads, other embedded contents are termed as non-necessary cookies. It is mandatory to procure user consent prior to running these cookies on your website.
SAVE & ACCEPT
347 shares