Home / Recipes / How To / How To Salt Eggplant

How To Salt Eggplant

Learning how to salt eggplant is a quick way to draw out moisture and add savory depth to all your eggplant dishes. Eliminate bitterness and season your eggplants from the inside out with this foolproof guide on how to prepare eggplant for cooking.

Hands-off and delicious? Yes, please! From Baked Eggplant Slices to Crispy Baked Eggplant, you can make any dish come to life with just two simple ingredients and a little bit of time. 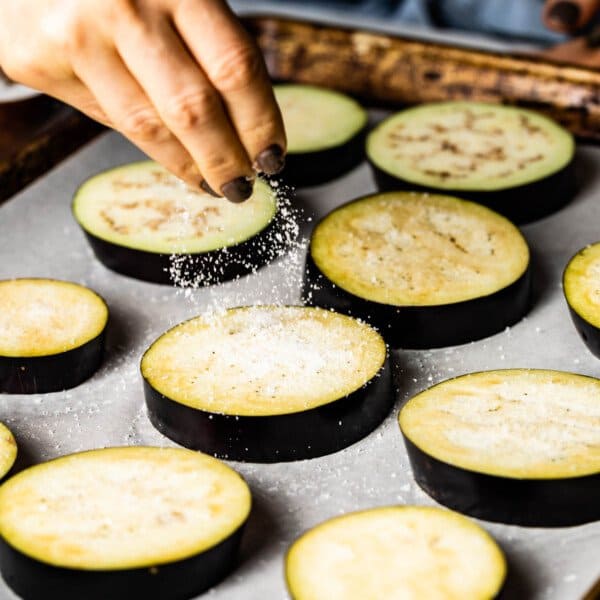 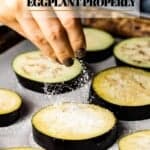 If you’re new to preparing eggplant for cooking, you might be wondering, “Is salting eggplant necessary?” The short answer is no. Because thanks to the advancements made in eggplant farming, most of the time, salting eggplant is not necessary. For most recipes, I simply slice up the veggie and get cooking!

However, if we go back in time and look back at when people first began to cook eggplants, the vegetable had a bitter taste. They came up with this salting process to help get the bitterness out of the eggplant before cooking it, thereby making it more palatable.

Since then, however, farmers have bred out much of eggplants’ signature bitterness. As Deborah Madison says in her cookbook New Vegetarian Cooking for Everyone (affiliate link):

“Eggplant that’s freshly picked, harvested before it’s full of seeds, and eaten within a few days is naturally sweet and doesn’t need salting.”

In other words, fresh, young eggplants bought at the grocery store or farmer’s market likely don’t need to be salted. Even so, there are other times when salting eggplant may still be a good idea:

In short: Do you need to salt eggplant before cooking? Not always. But it can’t hurt!

To purge eggplant, you will need globe eggplants and salt.

Though I am using a globe eggplant—the thicker, more spherical kind of eggplant most often found in the U.S.—you can use this technique to salt other types of eggplant (such as Japanese eggplant).

How to Purge Eggplants

Preparing aubergine is a cinch when you have these two methods on hand. Whether you prefer sweating eggplant or prefer brining it, you’ll find all you need right here.

The first method of salting eggplant—“sweating”—requires zero added liquid. Instead, a generous layer of salt does all the work. Now you can learn how to sweat eggplant in just five easy steps.

PRO TIP: The key to putting salt on eggplant is to coat the entire surface of the eggplant with a generous amount of salt. A minimum of one teaspoon of kosher salt is necessary for every medium-sized eggplant to draw out bitterness and add sufficient flavor. Furthermore, adding a good amount of salt will help tenderize the eggplant and keep its shape.

Soaking eggplant in salt water—also known as “brining”—is another easy way to prepare eggplant. Make a bowl of salt water, add your eggplant slices, and let time work its magic in this simple process.

If you’re looking for easy meal prep, these expert storage tips are for you! Not a single bite of your brined eggplant will go to waste when you have this neat guide at your disposal.

Want to know more about preparing eggplant for baking? Whether you’re curious about how to press eggplant or how to remove bitterness from eggplant, here are my answers to some of the most frequently asked questions.

How long should eggplant sweat?

Eggplants should sweat between 30 minutes and an hour. To check the doneness of your eggplant, look for little droplets of moisture on the vegetable’s surface.

How to remove water from eggplant?

To dry eggplant, all you need to do is blot your slices with paper towels (or a clean kitchen cloth). You may also line a cookie sheet with paper towels and arrange your eggplant pieces on top to remove excess water.

Do you rinse eggplant after salting?

Most people prefer to rinse their eggplant after salting it, but you’ll be fine without this extra step. Instead, you can simply blot excess salt with a paper towel or bypass this step entirely for a super well-seasoned eggplant.

Should you peel eggplant before cooking?

Whether you peel eggplant before cooking is a personal choice. The skin of an eggplant is edible and nutrient-rich. So, if removing the skin is not your thing that is totally fine.

Now that you know how to salt and prepare eggplant for cooking, here are a few recipes you can use eggplant along with a few different ways of cooking it:

If you try any of these methods for salting eggplant, please take a minute to rate the recipe and leave a comment about your experience below. It helps others who are thinking of making the recipe. And if you took some pictures, be sure to share them on Instagram using #foolproofeats so I can share them on my stories.

How To Salt Eggplant Recipe

By Aysegul Sanford
Yields: 1 eggplant
Prep Time: 5 mins
Resting time: 30 mins
Total Time: 35 mins
Learn how to salt eggplant to remove its bitterness using two simple methods. Purging eggplant might be the easiest way to make it taste better. So, next time you are cooking an eggplant dish follow these steps to prepare your eggplant for a perfectly seasoned and bitter free recipe. 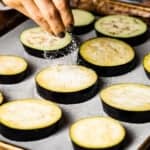 This website uses cookies to improve your experience while you navigate through the website. Out of these cookies, the cookies that are categorized as necessary are stored on your browser as they are essential for the working of basic functionalities of the website. We also use third-party cookies that help us analyze and understand how you use this website. These cookies will be stored in your browser only with your consent. You also have the option to opt-out of these cookies. But opting out of some of these cookies may have an effect on your browsing experience.
Necessary Always Enabled
Necessary cookies are absolutely essential for the website to function properly. This category only includes cookies that ensures basic functionalities and security features of the website. These cookies do not store any personal information.
Non-necessary
Any cookies that may not be particularly necessary for the website to function and is used specifically to collect user personal data via analytics, ads, other embedded contents are termed as non-necessary cookies. It is mandatory to procure user consent prior to running these cookies on your website.
SAVE & ACCEPT
91 shares