Turkish Stuffed Eggplant (aka Karniyarik) is made by stuffing roasted eggplants with tasty ground beef, pepper and tomatoes filling. Originated from the Ottoman cuisine, this is a delicious way to use eggplants that are in abundance during the summer months.

When I tell people where I am from, usually, the first thing that they tell me is that they love Turkish Food.  Most of the time, they had it or heard good things about it and want to try it.

As I was recently in Turkey, I thought about putting some of the most popular Turkish dishes on my blog.

This, Stuffed Eggplant dish, is one of them. Its Turkish name is karniyarik. Essentially, it is made by roasting (or frying) eggplants, opening their belly area, and stuffing with a ground beef mixture mixed with tomatoes and peppers.

As usual, one of my mother’s best friends, Sevil, graciously helped me make it.

Well… I will be honest. She made it. I helped. We not only had a fantastic time together but also, ended up with a fantastic dish.

Karniyarik is one of the staple dishes of the Ottoman Cuisine. In general, eggplant and eggplant dishes are BIG in our cuisine. If you ever come across with an Ottoman Cuisine cookbook, you will see several recipes that use them as the main ingredient. They say, in Ottoman Cuisine, there are more than 280 original recipes made from eggplant.

This dish kept its popularity over the years and, is still one of the most cooked dishes to this day in Turkey. Especially during summer times, when aubergines are in their peak season.

As most kids grew up in Turkey, I ate this dish many times during hot summer months. That is why I associate Karniyarik with brutally hot summer days of Bursa, where I grew up.

In the original recipe, eggplants are supposed to be fried. However, since I am not a big fan of fried food, I was hesitant about putting it in my blog as a favorite dish. Thanks to Sevil’s geniusness, this version is made by roasting eggplants rather than frying them.

She places them on a gas stove and turns them over as they roast. Of course, you can also grill them when you have the grill on.

The secret here is to cook/grill them in an open fire. As they roast, the soften and as a result, it gets easier to peel them.

Once they are softened, you can peel them under cold running water and set aside.

As the eggplants are roasting, make the ground beef sauce:

Preparing The Eggplants For Filling

When the eggplants are cooled, place them in an ovenproof 9X13 casserole dish. Be sure to leave the stems intact.

Using a spoon, gently create a large pocket in the “belly” of each eggplant.

Stuff each belly with the ground beef mixture by letting it mound through the slit.

Garnish each stuffed eggplant with a slice of tomato and a small pepper.

Right before baking it in the oven, make a quick tomato sauce by mixing a tablespoon of tomato paste with water. Drizzle it evenly over the eggplants.

This is done to make sure (1) they don’t dry during the baking process and (2) there is some liquid (to steam) in the oven.

Cover it with aluminum foil and bake in a preheated 350 degrees F oven for 15 minutes and then remove the foil and bake another 10 minutes.

Sprinkle them with fresh parsley as soon as they come out of the oven.

What To Serve with This Karniyarik Recipe:

It is customary to serve this karniyarik recipe with bulgur pilaf and tzatziki on the side. However, you can also serve it with lemon quinoa or a simple green salad like this Brussels sprout kale salad recipe.

Storage, Making Ahead, and Freezing:

You can make this Turkish Stuffed Eggplant recipe up to the point where you bake it, cover it with stretch film, and keep in in the fridge to bake it on the next day. Just make sure that it cools down a bit before you place it in the fridge.

You can also freeze it at that stage. If you do so:

Thaw it in the fridge a day before you are ready to serve it.

By Aysegul Sanford
Yields: 4 servings
Prep Time: 1 hr
Cook Time: 25 mins
Total Time: 1 hr 25 mins
Turkish Stuffed Eggplant (aka Karniyarik) is made by stuffing roasted eggplants with tasty ground beef, pepper and tomatoes filling. Originated from the Ottoman cuisine, this is a delicious way to use eggplants that are in abundance during the summer months. 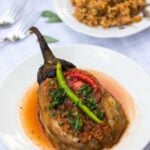 To Roast The Eggplant:

To Make The Meat Sauce:

Storage, Making Ahead, and Freezing:

You can make this Turkish Stuffed Eggplant recipe up to the point where you bake it, cover it with stretch film, and keep in in the fridge to bake it on the next day. Just make sure that it cools down a bit before you place it in the fridge. You can also freeze it at that stage. If you do so: Be sure to bring it to room temperature and cover it tightly to prevent freezer burn. Thaw it in the fridge a day before you are ready to serve it.

This recipe was originally published in July 2013 but updated with helpful notes in June 2020. 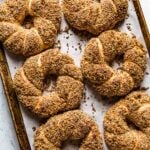 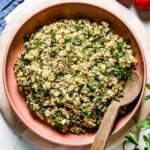 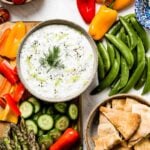 How to Make Tzatziki Sauce Recipe

How to Make Turkish Coffee