A vegan and gluten free Millet and Buckwheat Bread recipe made with buckwheat groats, millet, psyllium whole husk, rolled oats, chia seeds, and other superfood ingredients. The post and comments (from readers, who made this recipe) below includes several tips and tricks to make this healthy bread. 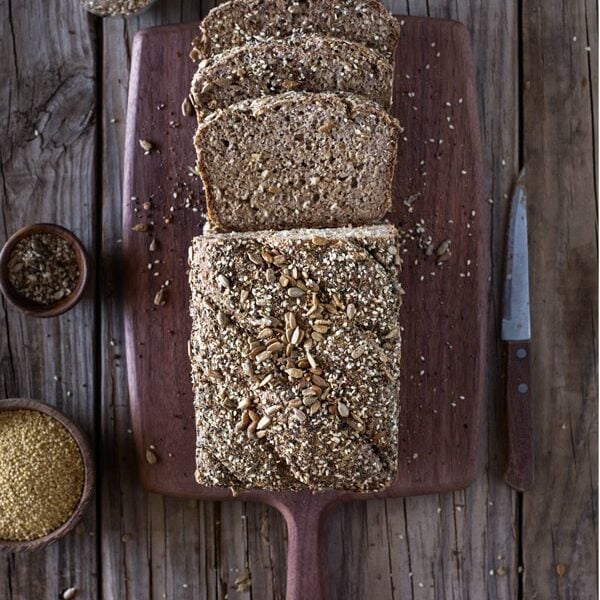 I have never baked a gluten-free bread before. Neither my husband nor I do have celiac disease. And truth be told, I don’t know much about baking gluten free. But when Amy Chaplin, who is one of my favorite vegan/vegetarian chefs, posted this recipe on her blog I was intrigued.

To be honest, I wanted to read more about it not because it was gluten-free, but because it was made with using millet and buckwheat (both of which are super healthy grains) instead of all-purpose flour. Even though there are many similar bread recipes out there on the Internet, I usually have a hard time figuring out where to start when it comes to baking bread using ancient grains.

But when she posted this recipe, I knew that it would be a good one to start with. Luckily as suspected, it didn’t disappoint. This bread is so easy to make, even for someone like me, who is learning her way around the world of vegan/gluten-free baking. It also is foolproof.

To make it, in addition to millet and buckwheat Amy uses an ingredient called psyllium seed husk (or also called psyllium husk). The first time I read about psyllium husk was a year ago, when David and Luise of Green Kitchen Stories posted a recipe called Cashew Rawgurt. It was basically yogurt made with cashews instead of milk.

They used psyllium husk to give it a creamy consistency that was similar to the consistency of yogurt. But then, more and more I read about gluten-free and healthy baking ingredients, I realized that it is a much more of a common ingredient than I thought.

After some research and surfing through the Internet, I found out that psyllium husk (the photo above is what it looks like after it was mixed with water):

With all that being said, there are many resources on the Internet cautioning people as some allergic reactions to pysllium husk have been recorded. Therefore, if this is your first time consuming it, I recommend trying in a small dose before using it to bake bread.

You could also do what I did; simply add a tablespoon of it in a smoothie (another popular way of incorporating it into your diet) to see if you react to it in a negative way. Luckily, both my husband and I were totally fine after we drank our smoothies.

About This Millet Buckwheat Recipe

In her blog post, Amy posted a halved version of this recipe. However, she suggested that it would be fine to double it, which is what I did. To make the dough, you use a food processor. If you have a regular 9-cup food processor like mine, you may find that when all the ingredients are placed in it, it may look like it is too much. For this reason, on my first try I made two separate batches, mixed them in a bowl, and then baked them together.

But on my second try (which is the bread in the photos), I placed everything in the food processor at the same time. It was quite full, but I stopped every 8-10 seconds to scrape the bowl during the process to make sure that everything is mixing evenly. Either way, they both turned out nicely. So it is totally up to you and your preference. Also if you want, you can half the recipe for a smaller loaf.

On a final note, it is imperative to score the bread twice- once before it goes into the oven and an additional time after it has been baking for 40 minutes. Doing so lets some air into the dough for it to cook properly. Since it is better to score it in the same place, I suggest sprinkling it with the seeds prior to scoring it for the first time. That way when it is time for you to score it again you can easily see the marks.

By Aysegul Sanford
Yields: 8 slices (One 9X5 loaf of bread)
Prep Time: 30 mins
Cook Time: 1 hr 30 mins
A vegan and gluten free Millet and Buckwheat Bread recipe made with buckwheat groats, millet, psyllium whole husk, rolled oats, chia seeds, and other superfood ingredients. The post and comments (from readers, who made this recipe) below includes several tips and tricks to make this healthy bread. 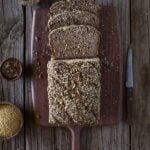 This recipe is adapted from Amy Chaplin’s Gluten-Free Millet and Buckwheat recipe.

This website uses cookies to improve your experience while you navigate through the website. Out of these cookies, the cookies that are categorized as necessary are stored on your browser as they are essential for the working of basic functionalities of the website. We also use third-party cookies that help us analyze and understand how you use this website. These cookies will be stored in your browser only with your consent. You also have the option to opt-out of these cookies. But opting out of some of these cookies may have an effect on your browsing experience.
Necessary Always Enabled
Necessary cookies are absolutely essential for the website to function properly. This category only includes cookies that ensures basic functionalities and security features of the website. These cookies do not store any personal information.
Non-necessary
Any cookies that may not be particularly necessary for the website to function and is used specifically to collect user personal data via analytics, ads, other embedded contents are termed as non-necessary cookies. It is mandatory to procure user consent prior to running these cookies on your website.
SAVE & ACCEPT
942 shares