This overnight coconut buckwheat porridge is a filling, healthy, and vegan breakfast porridge recipe made with buckwheat, coconut milk (or almond milk), and chia seeds and sweetened with fresh fruit. Easy and quick to make and perfect breakfast when you need something quick and delicious. 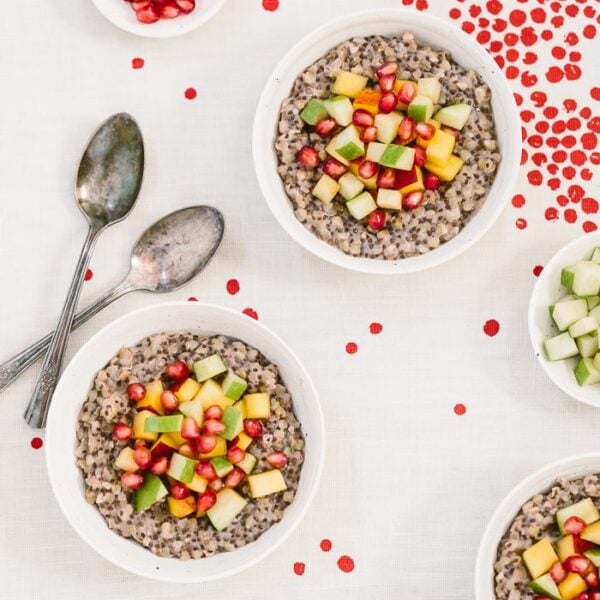 The first time I published this recipe was back in January of 2015. It was around the time that I had discovered the addictive flavor of buckwheat and was trying to find interesting ways of using it. This recipe came about when I decided to swap oatmeal with buckwheat and see what would happen.

At first, similar to my oatmeal with almond milk and chia seeds recipe, I cooked it in almond milk by itself. However, it took much longer than I would like, especially because I wanted it to be cooked fast so that I can make it on a weekday morning. Then I tried letting it sit in milk overnight, and just like that, IT WORKED!

The time spent in the fridge softened the hard seed, and as a result, shortened the time of cooking. After a few tries, I decided to use coconut milk instead to change it up a little bit. And the high-fat content of coconut milk made it so creamy.

Since the first day it was published, this recipe has been a reader favorite. It has been pinned and shared more times than I could have ever imagined. So today here I am with a quick how-to video (that you can watch in the recipe card below) and a few new photos.

A Few Helpful tips for this overnight buckwheat porridge recipe 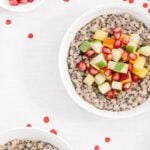 For the Toppings: (all optional) 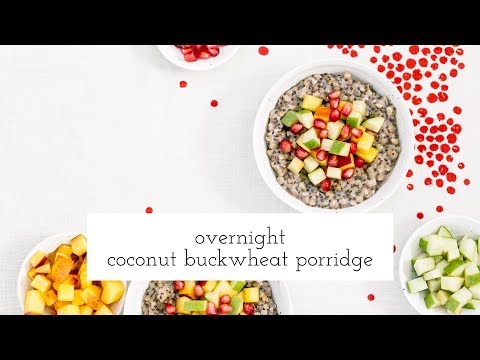 Note: To keep it healthy, I didn’t add extra sugars to this recipe. But if you like it sweeter, you can add one or two tablespoons of natural sweeteners like honey, agave nectar, or maple syrup.

Below is the original post that was published back in January of 2015. If you scroll down to the bottom of the post, you can read some very helpful notes from readers who made the recipe.

What is your weekday breakfast routine?

In our house, when it comes to our weekday breakfast choices, Dwight and I are quite the opposite. I usually prefer almond milk oatmeal topped with nuts and berries, whereas Dwight likes his two eggs on toast accompanied with a PB&J sandwich. I prefer coffee and he loves his green tea. Over the last couple of years, I tried to convert him to oatmeal, but regardless of the way I prepared it he always thought of it being too boring.

Even though I don’t think that oatmeal can ever be boring, even I sometimes feel as though I can switch things up a little bit. About a month ago, while I was looking for an alternative, I saw a recipe made with buckwheat and decided to give it a try. Since then, I have been experimenting with it and find that it is such a great alternative to oatmeal. Here, I must admit – I had never cooked with buckwheat before and had no idea what it was going to be like. To my surprise, it wasn’t much more different than making oatmeal.

That being said, the technique of preparing buckwheat is just a little different. For one thing, it takes longer to cook buckwheat than to cook oatmeal. Though it is only 20 to 25 minutes, I didn’t want to wait that long for it to cook it on a weekday morning. Instead, I opted for letting it sit in coconut milk overnight. The time spent in the fridge gave it a softer, almost cereal-like texture with nutty flavors. All I had to do was to put everything together at night, cover it with stretch film, and quickly warm it up in the morning for a super nutritious breakfast in the morning.

For this version, I added chia seeds to thicken it up which also increased its notoriousness. As it sat in the fridge overnight, the chia seeds plumped up creating a soup like consistency. The recipe below serves for two, and as long as you keep it in the fridge tightly covered, it keeps its freshness for an extra day.

For the first morning’s breakfast, I warmed up one serving of it in a pot and topped it off with nuts and fresh fruits. And for the second morning, I added the rest of it into my smoothie that I made with spinach, fresh fruits, half a cup of coconut milk, and a tablespoon of peanut butter. It ended up being a refreshing and nutritious alternative to a warm porridge-like breakfast dish.

I chose to use coconut milk, but any other nut milk of your choice would work for this recipe. I didn’t use any sugar to keep it healthier, but if you want you can sweeten it up with natural sugars like maple syrup, honey, or agave nectar.

This website uses cookies to improve your experience while you navigate through the website. Out of these cookies, the cookies that are categorized as necessary are stored on your browser as they are essential for the working of basic functionalities of the website. We also use third-party cookies that help us analyze and understand how you use this website. These cookies will be stored in your browser only with your consent. You also have the option to opt-out of these cookies. But opting out of some of these cookies may have an effect on your browsing experience.
Necessary Always Enabled
Necessary cookies are absolutely essential for the website to function properly. This category only includes cookies that ensures basic functionalities and security features of the website. These cookies do not store any personal information.
Non-necessary
Any cookies that may not be particularly necessary for the website to function and is used specifically to collect user personal data via analytics, ads, other embedded contents are termed as non-necessary cookies. It is mandatory to procure user consent prior to running these cookies on your website.
SAVE & ACCEPT
4039 shares