Hearty vegan sloppy joes made with fresh and simple ingredients (i.e. mushrooms, onions, and peppers) and topped off with wilted red cabbage. Ready in just about 30 minutes, this plant-based meal is guaranteed to impress. 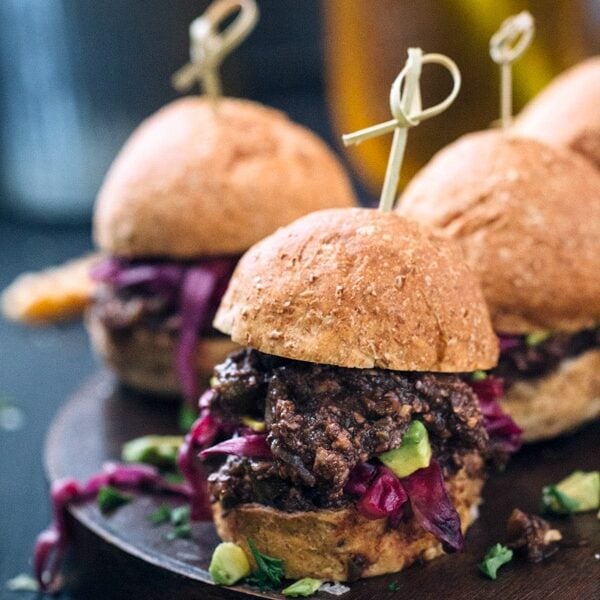 It all started when we were on vacation in Vancouver, BC last year. My husband Dwight used to work in a hotel there prior to us moving down to Virgin Gorda.

He had a close friend, who was also a famous local chef, named Ned Bell. They worked together during the opening of Hotel Georgia in 2011, and after a year, parted ways as their careers took them to different places.

When Dwight phoned Ned to let him know that we were in town, he immediately invited us to dinner at Yew, the restaurant that he was (and is still) working at.

Yew is a seafood restaurant with an extensive wine list located in Four Seasons, Vancouver.

We went there not knowing that they also had an extensive vegan menu. Up until that day, neither of us had ever been to such a high-end restaurant that also served vegan food. Though the seafood dishes on the menu looked very appealing, I decided to give the vegan menu a shot.

It was amazing. I ordered the squash salad as an appetizer and the crispy cauliflower dish as an entrée. They were so tasty;  I was truly amazed at how flavorful and delicious vegan food could be.

Since then, I try vegan recipes in my own kitchen from time to time. Though it does not excite Dwight as much as our typical meat-based meals, there are times that he is happily surprised with a vegan dish. These vegan Sloppy Joe’s ended up being one of those recipes.

To make this traditional American dish vegan, I swapped the ground beef with Portabella mushrooms. I cooked it in beer to give it an earthy, rich flavor, which also made it taste like it has been simmering for a long time. A last minute addition of walnuts gave it a surprising crunch. After spooning a generous amount of this deliciousness on freshly toasted slider buns, I topped it off with balsamic vinegar-flavored wilted red cabbage and chunks of avocados.

It was a healthy lunch feast for us on that day. A lunch that I will be making more often as we approach the excruciatingly hot summer days of the Caribbean. 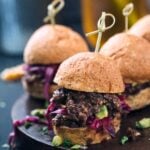 Adapted with changes from this recipe.

This website uses cookies to improve your experience while you navigate through the website. Out of these cookies, the cookies that are categorized as necessary are stored on your browser as they are essential for the working of basic functionalities of the website. We also use third-party cookies that help us analyze and understand how you use this website. These cookies will be stored in your browser only with your consent. You also have the option to opt-out of these cookies. But opting out of some of these cookies may have an effect on your browsing experience.
Necessary Always Enabled
Necessary cookies are absolutely essential for the website to function properly. This category only includes cookies that ensures basic functionalities and security features of the website. These cookies do not store any personal information.
Non-necessary
Any cookies that may not be particularly necessary for the website to function and is used specifically to collect user personal data via analytics, ads, other embedded contents are termed as non-necessary cookies. It is mandatory to procure user consent prior to running these cookies on your website.
SAVE & ACCEPT
134 shares