This Cheese Phyllo rolls recipe is made by rolling phyllo dough sheets with a cheese and parsley mixture and arranging them on a cake pan side by side. This is not only a delicious but also a visually pleasing dish that is perfect for breakfast or brunch. 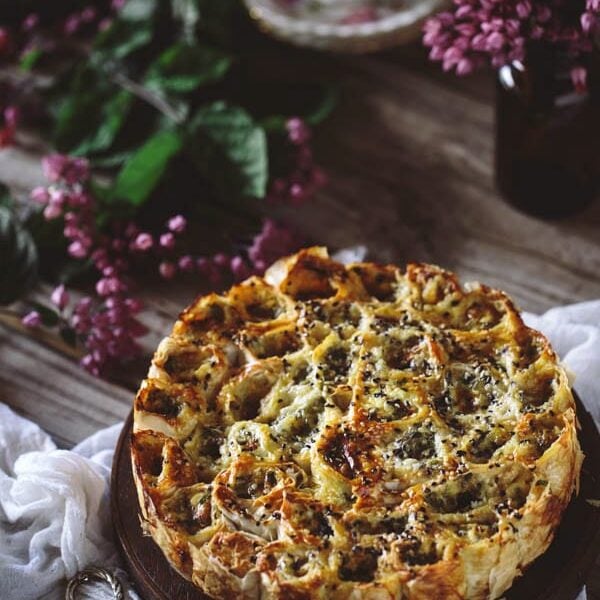 Over the course of last year, there were a couple of recipes that I thought were the best of the best that I have ever created – the kind that I thought people would go crazy for and that would hopefully break records. Guess what happened?? None of them became as popular as I hoped. Surprisingly, recipes that I shared and didn’t feel like they were anything spectacular made it big. Sadly, what I thought is my best work was somewhat ignored and got lost in the deep hole of this crazy place that I call W(ild) W(ild) W(eb).

Just to give you an example; the recipe for the Oatmeal withAlmond Milk and Chia Seeds was the second most popular recipe on Foolproof Living last year. Funny thing is that if it is wasn’t for my best friend’s suggestion, I would have never considered sharing it, thinking that it was such an easy and quick dish that wouldn’t even require a recipe. I find it hard to believe, but even at this very moment as I am typing this there are currently 4 people on that very page. How crazy is that?!

Although I am not much of a new year’s resolution person, this year I want to be more intentional with what I share on my website. Looking over the numbers and most popular recipes of 2014 on Foolproof Living made me think. Yes, I need to make dishes that I like and want to eat, but I also need to think about what you want to see here too. After reading this blog post, it was clear that it is about time to listen to what the statistics are saying and decide on what to share based on that information. After all, I really want this website is to be a source for everyone.

With that in mind, I decided to look for recipes that are similar to the top three most popular recipes of 2014. This Cheesy Parsley Phyllo Rolls is a different version of the Spinach and Feta Cheese Börek, which happens to be the third most popular recipe of last year. I think the reason why it became so popular is because it is (1) authentic, (2) easy-to-make, and (3) a great dish that can be made for any meal. Not to mention, it is SO delicious.

As I was looking for inspiration for a different version of that börek dish, I stumbled upon this great Israeli food blog called Matkonation and saw this recipe. I thought that the presentation was so beautiful that I decided to create my own version of it. I am glad I did, because it ended up being a delicious alternative to börek that you can make anytime of the day and for any occasion. It is almost like a savory monkey bread, but it is made with phyllo dough and a simple filling with whatever I had in my fridge at the time. For this version, I used 4 different types of cheese and fresh parsley, but you can put anything you want in there. I bet you that caramelized onions with goat cheese or lightly cooked thyme flavored mushrooms with Gruyere cheese would also make great filling options for these phyllo rolls.

As you can see in the photograph below, I cut it as a slice (just like a cake), but you can certainly pull it apart and serve it like monkey or pull-apart bread.

I also made a quick video of how I made it with the help of my friend Berenice. Though I must admit, neither of us knows anything about making videos. So pardon me, for the lack of artistic presentation. I thought it would be helpful to show you how I made it rather than just writing it in a recipe.

On a final note, this recipe is one of those recipes that you can make ahead of time. As you’ll see in the video, I made it a day in advance for a brunch party and let it sit in the fridge overnight. Then I baked it in the morning, right before my friends came over. Even though it would be okay to bake it right away, I strongly suggest allowing the flavors marinate for a couple of hours (or overnight) for the best results.

By Aysegul Sanford
Yields: 8 slices
Prep Time: 20 mins
Cook Time: 1 hr
Total Time: 1 hr 20 mins
This Cheese Phyllo rolls recipe is made by rolling phyllo dough sheets with a cheese and parsley mixture and arranging them on a cake pan side by side. This is not only a delicious but also a visually pleasing dish that is perfect for breakfast or brunch. 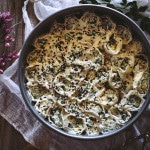 Note: When adding salt to the liquid filling make sure to taste the cheese (especially the feta cheese). If it is salty enough you can omit adding salt.

This website uses cookies to improve your experience while you navigate through the website. Out of these cookies, the cookies that are categorized as necessary are stored on your browser as they are essential for the working of basic functionalities of the website. We also use third-party cookies that help us analyze and understand how you use this website. These cookies will be stored in your browser only with your consent. You also have the option to opt-out of these cookies. But opting out of some of these cookies may have an effect on your browsing experience.
Necessary Always Enabled
Necessary cookies are absolutely essential for the website to function properly. This category only includes cookies that ensures basic functionalities and security features of the website. These cookies do not store any personal information.
Non-necessary
Any cookies that may not be particularly necessary for the website to function and is used specifically to collect user personal data via analytics, ads, other embedded contents are termed as non-necessary cookies. It is mandatory to procure user consent prior to running these cookies on your website.
SAVE & ACCEPT
447 shares