Middle Eastern Inspired Stuffed Peppers filled with a bulgur mixture mixed with currants, pine nuts, all spice and fresh herbs. This is a great vegan dish that you can serve all year round. 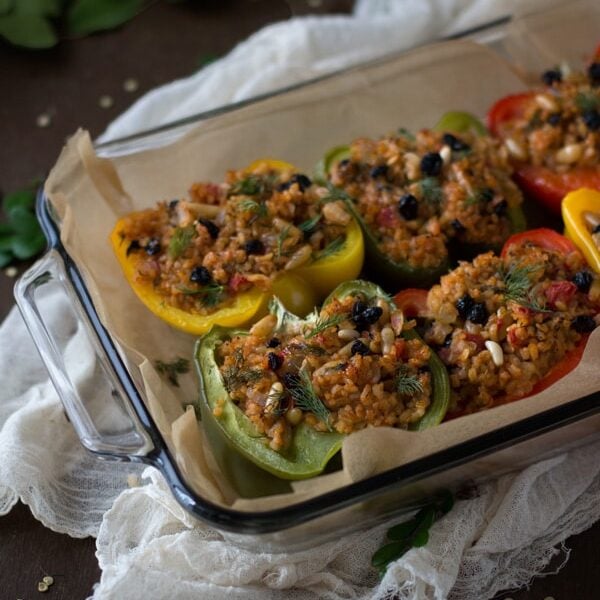 For the last couple of months, my husband and I have been on a health kick. Initially, it was my idea to make minor changes to our diets for a healthier lifestyle. Dwight, on the other hand, just assumed it was another one of those things that I would get hyped up about initially, but would go away after my enthusiasm inevitably waned. But this was not one of those things – this new habit seems to have stuck.

Day after day, I have been making these delicious AND healthy dishes like Cauliflower Risotto, Black Bean and Quinoa Tacos, and Savory Steel-Cut Oats to put in front of him.

Over time, he has accepted that it is not a phase and has quietly come to enjoy these meals. While he’s never actually told me this, I think he has even started enjoying them more than the typical American comfort food type of dishes that he grew up eating.

Recently, we watched the documentary Forks over Knives which is about how what we eat has a direct effect on our overall health, and how little changes that we make in our diet can result in a disease-free future. Obviously, this was nothing new to me, but for Dwight, it was an eye opener, and therefore very effective. He had already known about the importance of eating healthy, but seeing the results of studies over years of research and experiments put things in a much clearer perspective for him.

I think by the end, more than anything, it made both of us to realize that it doesn’t take too much to make minor changes in our diet to get big results.

So we decided that we would incorporate more of a plant-based diet with grains and beans into our lives. Instead of using dairy and oils to flavor things, we agreed to use spices, fresh herbs, nuts, and seeds.

Our goal is to do this 80% of the time. I mean, we don’t want to stop eating meat, dairy, or sugar completely, but we do want to make sure that we keep the consumption of these types of foods to a minimum or just save them for celebratory occasions.

I must admit – it has been a work in progress, but overall, we both have been enjoying it. Of course, living on an island with very minimal distractions helps, but it has also been a lot fun for me to get creative with what we have access to.

These Middle Eastern Inspired Stuffed Peppers are a part of our 80% diet. It is a dish that my mother would make during the summers when bell peppers were in abundance back home. It is made with a bulgur filling flavored with lots of onions, cinnamon, all spice, pine nuts, dried currents, and fresh herbs like basil, mint, and dill.

I personally love this dish because (1) it reminds me of back home and (2) I find that the combination of flavors of cinnamon, all spice, pine nuts, and currants mixed with fresh herbs do an amazing job of turning otherwise boring bell peppers into a uniquely delicious summer dish. Not to mention it is filling, healthy, and vegan. 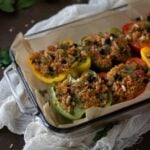 This website uses cookies to improve your experience while you navigate through the website. Out of these cookies, the cookies that are categorized as necessary are stored on your browser as they are essential for the working of basic functionalities of the website. We also use third-party cookies that help us analyze and understand how you use this website. These cookies will be stored in your browser only with your consent. You also have the option to opt-out of these cookies. But opting out of some of these cookies may have an effect on your browsing experience.
Necessary Always Enabled
Necessary cookies are absolutely essential for the website to function properly. This category only includes cookies that ensures basic functionalities and security features of the website. These cookies do not store any personal information.
Non-necessary
Any cookies that may not be particularly necessary for the website to function and is used specifically to collect user personal data via analytics, ads, other embedded contents are termed as non-necessary cookies. It is mandatory to procure user consent prior to running these cookies on your website.
SAVE & ACCEPT
574 shares