This Sesame Crusted Seared Tuna Salad is light, fresh, and colorful with hints of sweet and savory flavors from an Asian-style dressing. It’s a quick and easy weeknight salad recipe that requires a one-minute sear for delicately creamy tuna every time. 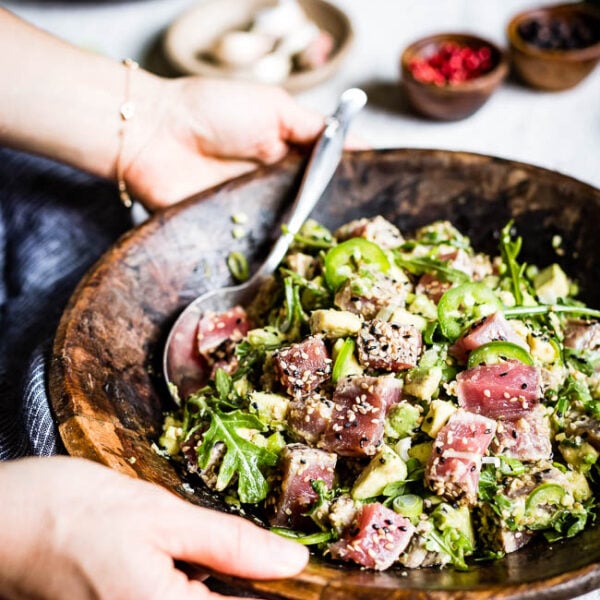 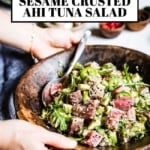 This Sesame Crusted Seared Ahi Tuna Salad recipe is an adaptation from this Asian Tuna Salad that was published back in 2013. I also like to think of it as a fancier tuna recipe when compared to the classic Tuna Melt Sandwich or Chickpea Tuna Salad.

An original Barefoot Contessa recipe, it is one of our favorite salads. Since a lot of people loved the Salmon Nicoise Salad I published a while back, I thought it would be fun to share our other favorite seafood dinner, Sesame Tuna Salad.

Since one of my goals for this year is to incorporate more seafood recipes into my diet, it was time to recreate a classic.

So the other day when I saw these beautiful yellowfin tuna steaks at our local supermarket, I thought this would be the perfect opportunity to revisit this recipe. However, this time, with a little more detailed information on how to pick the freshest tuna and a fresh and flavorful recipe.

The ingredients you need to make this tuna steak salad come in three parts – the Asian dressing, the sesame-crusted tuna, and the mixed greens.

PRO TIP: Make sure to zest the limes with a Microplane before you juice them (a step I sometimes forget). It’s much easier to zest the rind of a whole lime rather than one that has already been cut in half and squeezed.

A Word on Yellowfin (Ahi) Tuna:

I would love to take a moment and talk about what ahi tuna is before we talk about how to season, cook, and serve it in this sesame seared tuna salad recipe.

There are a number of tuna varieties, but the one we are cooking today is yellowfin (also known as ahi) tuna. This is an important distinction as tuna varieties vary in taste, texture, and fat content (the reason why some tuna fish are better for canning, whereas others are better for sushi or searing).

Yellowfin tuna is less expensive when compared to bluefin tuna, but just as exceptional in quality. It is also more widely available in supermarkets or local fish markets. The steaks I used today were sushi-grade ahi tuna steaks that were 1-inch thick with a deep pink in color and mild flavor.

If you need more information on how to pick the freshest tuna, you can find all my tips below underneath the recipe card.

PRO TIP: Frozen sushi-grade fish does not mean it’s not fresh. In most cases, the fish was frozen at the peak of freshness. As always, purchase from a reputable source and ask questions!

The trick to perfectly seared tuna is cold tuna steaks and a dry surface. The contrast between the cold tuna and the hot skillet creates that beautiful outer sear and raw center.

I recommend prepping all your ingredients first, then removing the tuna from the fridge just before you are ready to cook.

Remove the tuna from the package, pat the entire surface dry with paper towels and coat in the seasoned sesame seeds.

How to sear tuna steak

Since yellowfin tuna has low-fat content, it can easily dry out if cooked all the way through.

Searing the tuna for just 1-2 minutes on each side in a super hot skillet ensures a golden-brown crust and creamy center. It’s a simple technique that produces restaurant-worthy tuna every time.

As you will read in the recipe below, after I coat the steaks with toasted sesame seeds, I lightly sear them in a non-stick skillet, only 1-minute on each side.

Plus, just with ceviche recipes, the acid in the Asian ahi tuna salad dressing I am using here will continue to cook the seared tuna steak.

That being said, if you prefer it cooked medium or medium-well, you can sear it up to 2 minutes on each side and let it sit in the sauce for a bit longer. I wouldn’t go over 30 minutes, however, as the tuna will cook all the way through and you’ll lose that ultra-creamy texture.

How to slice seared tuna?

To properly slice seared tuna, slice the fillet against the grain into 1/4 inch thick pieces with a sharp slicing knife. Rather than sawing at the fish, apply gentle pressure with the knife and drag your knife in one, long stroke all the way through.

Can you eat ahi tuna raw?

In my opinion, the whole reason for buying the best quality tuna and paying a premium price is to enjoy its creaminess while it is served semi-raw. But I know there is much skepticism about whether or not tuna is safe to eat raw.

According to this article by Healthline, the FDA considers it safe to eat raw tuna by first freezing and then defrosting in the refrigerator before consumption. But properly freezing and defrosting takes time and knowledge.

My recommendation – purchase tuna from a reputable source who is knowledgeable about the origin of the fish and how it is handled.

Keep reading for more info on how to buy the freshest tuna available.

This Asian ahi tuna salad is prepped and ready in a few simple steps. Simply:

How To Serve Ahi Tuna Salad

I love to serve this Asian tuna steak salad recipe just as is, with a crisp glass of white wine.

But another option is to serve it as a tuna salad bowl over a bed of forbidden rice. The earthy and nutty tones of this kind of rice complement the salad very well.

You can also try any other starch like brown, wild rice, quinoa or even white rice. This is optional, but extremely satisfying on those days when you want a meal a bit more substantial. 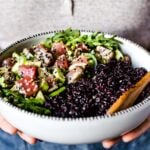 For the Sesame Crusted Tuna:

What to look for buying tuna and how to know that it is fresh?

As you may already know, tuna steaks are expensive. So it is important to know how to pick the freshest tuna. Today, we are talking about yellowfin tuna. It’s the perfect tuna for this recipe and widely available.

Here are a couple of things to look for while buying tuna:

This website uses cookies to improve your experience while you navigate through the website. Out of these cookies, the cookies that are categorized as necessary are stored on your browser as they are essential for the working of basic functionalities of the website. We also use third-party cookies that help us analyze and understand how you use this website. These cookies will be stored in your browser only with your consent. You also have the option to opt-out of these cookies. But opting out of some of these cookies may have an effect on your browsing experience.
Necessary Always Enabled
Necessary cookies are absolutely essential for the website to function properly. This category only includes cookies that ensures basic functionalities and security features of the website. These cookies do not store any personal information.
Non-necessary
Any cookies that may not be particularly necessary for the website to function and is used specifically to collect user personal data via analytics, ads, other embedded contents are termed as non-necessary cookies. It is mandatory to procure user consent prior to running these cookies on your website.
SAVE & ACCEPT
3263 shares