This Muhammara recipe is simple, quick and bursting with authentic Middle Eastern flavors. It all comes together in the bowl of your food processor in just a few easy steps. Serve it as a dip, spread or sauce for an exceptionally sweet, smoky, savory bite!

My aunt was the queen of Muhammara sauce! It was a vegetable dip I grew up eating. We literally put it on everything – pasta, eggs, vegetables – and brought it to all our special occasions. Being one of the popular recipes of the Turkish Cuisine, pita and this muhammara dip was our version of bread and butter.

If you’ve never heard of this Middle Eastern pepper sauce, prepare to be amazed! Similar to its simpler version roasted red pepper walnut dip, it is robust in flavor with pomegranate molasses added to it to make it closer to its traditional version.

All you need is a food processor and 30 minutes for a Meditteranean-inspired dip that is bright in both color and flavor! Intrigued? Let’s break it down.

To make this Mediterranean red pepper sauce, you will need the following ingredients:

There a number of ways to serve, such as:

Tips for the best muhammara recipe:

Muhammara is a traditional Middle Eastern red pepper dip or condiment typically served a dip or sauce with warm pita bread. It is claimed by many countries, but the actual origin is from Aleppo, Syria.
Also called Muhumra or Marmara, the dip is popular throughout Lebanon, Turkey, Armenia, the Middle East, and Meditteranean. It’s one of those recipes that’s very widely adapted according to the region and personal taste.

How do you pronounce Muhammara?

Muhammara is the formal pronunciation and it sounds like it is written (though the “h” is slightly sibilant, almost as if you are exhaling through a sore throat). Not so easy to get right! Mm’hamara is a more idiomatic version. It also means roasted or burnt (made red), sharing the same etymological root as the word red (Ahmar).

This recipe makes 1 1/2 cups and easily serves 4 people. And one serving of it is only 240 calories! When you pair the dip with fresh sliced vegetables, it’s even better for you. So go ahead, eat your veggies!

By Aysegul Sanford
Yields: 6 servings (1 1/2 cups)
Prep Time: 20 mins
Cook Time: 10 mins
Total Time: 30 mins
Muhammara is a traditional Syrian red pepper dip made with roasted red peppers, walnuts, and pomegranate molasses. This recipe is easy to make, vegan and gluten-free. Serve as a dip, spread, or even as a pasta sauce. It is deliciously addictive! 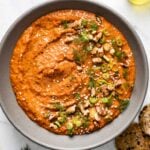 This recipe has been adapted (with minor changes) from Vegetables Illustrated (affiliate link).

This website uses cookies to improve your experience while you navigate through the website. Out of these cookies, the cookies that are categorized as necessary are stored on your browser as they are essential for the working of basic functionalities of the website. We also use third-party cookies that help us analyze and understand how you use this website. These cookies will be stored in your browser only with your consent. You also have the option to opt-out of these cookies. But opting out of some of these cookies may have an effect on your browsing experience.
Necessary Always Enabled
Necessary cookies are absolutely essential for the website to function properly. This category only includes cookies that ensures basic functionalities and security features of the website. These cookies do not store any personal information.
Non-necessary
Any cookies that may not be particularly necessary for the website to function and is used specifically to collect user personal data via analytics, ads, other embedded contents are termed as non-necessary cookies. It is mandatory to procure user consent prior to running these cookies on your website.
SAVE & ACCEPT
5691 shares