Turkish white bean salad, aka Piyaz is a traditional Turkish side dish/salad recipe made from white beans, tomatoes, red onion, parsley and a simple Turkish salad dressing. Ready in 10 minutes, this easy Mediterranean white bean salad is a great recipe when you need a creative side dish to serve along all your chicken, meat, and vegetarian main dishes. 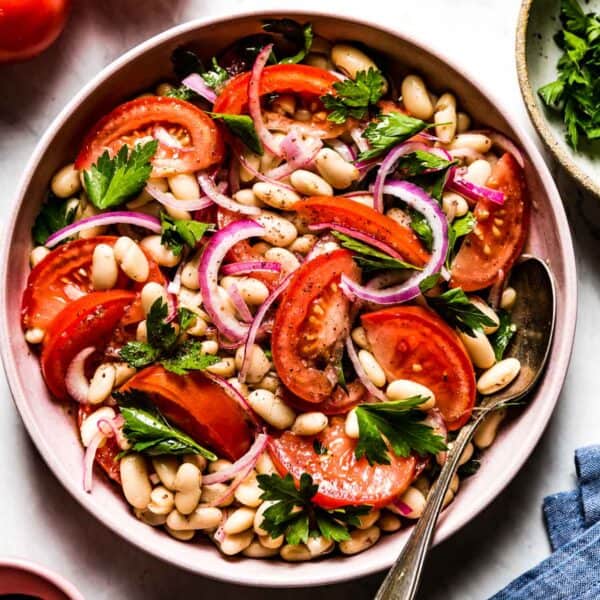 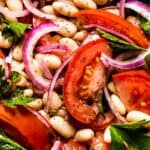 You can’t talk about Turkish Cuisine and not mention Piyaz, our version of White Bean Salad recipe. Growing up, this was a staple in our house. My mom would serve this as a side dish with her kofte (aka Turkish meatballs) or karniyarik (aka stuffed eggplants).

Whenever we had this on the menu, she would call it the “Kofte Piyaz” dinner. It was her version of a weeknight meal because it comes together so quickly with minimal effort. If you are a fan of one of the most popular Turkish recipe kisir, aka tabbouleh, you will love this recipe.

Table of Contents show
Why I love this recipe:
Ingredients:
How To Make This Turkish Salad?:
Serving Suggestions:
Make Ahead and Storage Instructions:
A Few Variations:
FAQs:
Other Bean Salad Recipes You Might Also Like:
Piyaz – Turkish White Bean Salad Recipe

Why I love this recipe:

If you have ever traveled around the Middle Eastern and Mediterranean regions or visited one of the Turkish restaurants around the world, chances are you are familiar with this cold white bean salad recipe. Several cuisines like Greek, Turkish, Persian, and even Armenian offer a version of this salad.

Here are a few reasons why I think this recipe is so popular and stood the test of time:

As it is with most salad recipes, this Turkish white bean recipe has three sets of ingredients; a zesty salad dressing, fresh salad ingredients, and optional toppings.

How To Make This Turkish Salad?:

Make Ahead and Storage Instructions:

Piyaz is a Turkish salad recipe that is made with cooked white beans, red onions, and a zesty grape vinegar and lemon juice salad dressing. It is also a popular dish served as a side dish, meze (small tapas like dishes), or a main meal in most Middle East and Mediterranean countries.

What is the meaning of word, “piyaz”?

Piyaz offers refreshingly zesty and creamy flavors with every bite. The soft white beans mixed with red onions and zesty vinaigrette delivers a bit of savory, sweet, creamy, and tangy all at the same time.

If you liked this piyaz recipe, it is likely that you are a fan of bean salads like we do. Here are a few more recipes you might also like:

By Aysegul Sanford
Yields: 4 servings
Prep Time: 10 mins
Total Time: 10 mins
Piyaz, a refreshing, creamy and zesty Turkish white bean salad that is the perfect side dish when you want to impress. It comes together in 10 minutes and can be made in advance. 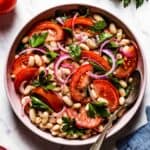 This website uses cookies to improve your experience while you navigate through the website. Out of these cookies, the cookies that are categorized as necessary are stored on your browser as they are essential for the working of basic functionalities of the website. We also use third-party cookies that help us analyze and understand how you use this website. These cookies will be stored in your browser only with your consent. You also have the option to opt-out of these cookies. But opting out of some of these cookies may have an effect on your browsing experience.
Necessary Always Enabled
Necessary cookies are absolutely essential for the website to function properly. This category only includes cookies that ensures basic functionalities and security features of the website. These cookies do not store any personal information.
Non-necessary
Any cookies that may not be particularly necessary for the website to function and is used specifically to collect user personal data via analytics, ads, other embedded contents are termed as non-necessary cookies. It is mandatory to procure user consent prior to running these cookies on your website.
SAVE & ACCEPT
17901 shares