A vegan Cauliflower Steak Sandwich with romesco sauce. Simply put, a head of cauliflower sliced into “steaks”, sauteed in a pan, placed on a sandwich bread smeared with homemade romesco sauce and coleslaw. This easy vegan sandwich recipe is a great sandwich if you are looking for something healthy and delicious. 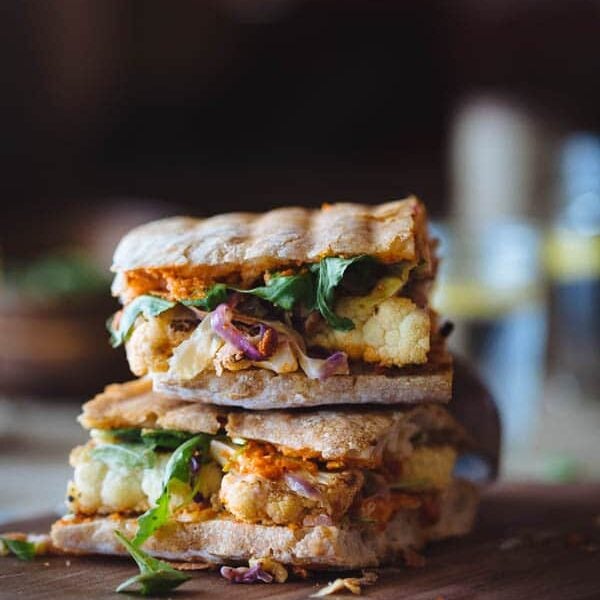 While I was in Chicago, I went to a place called Publican Quality Meats. It was a small bakery/butcher/coffee shop/market with a seating area. A little bit of everything in one place…

The first time I went there, I was looking for a quick bite to eat. All I wanted was a small sandwich with a cold beverage. The menu on the large wall listed a little bit of everything, ranging from cheese & charcuterie plates to different kinds of sandwiches. Even though the butcher’s daily cheese plate sounded amazing, I had my mind set on getting a sandwich so I went with the one that was called The Perks of Being a Cauliflower.

See, I love cauliflower just as anyone else, and quite frankly I don’t use it enough in my cooking. But I was intrigued, because the name was so creative. I decided that I wanted to find out about the perks of being a cauliflower.

I thought it was SO delicious. I would have never thought that using romesco sauce and cauliflower “steaks” together, flavoring them with lemon aioli sauce, and wrapping everything up in a garlic ciabatta bread would yield such a tasty sandwich.

On my last day in Chicago, I went there one last time to get the same sandwich so that I had something really good to eat in the plane on my way back home. I also wanted to look at it closely so that I could try to create something similar in my own kitchen.

So my version of that sandwich is this Cauliflower Steak Sandwich with Romesco Sauce. But this one is vegan and somewhat healthier, perfect for those of you who are calorie-conscious.

The original version was made with artisan-style garlic ciabatta bread. I made my own ciabatta bread, but you can easily find it in a bakery, supermarket, or in a neighborhood artisanal bread shop, if there is one close by.

Once you have the bread, there are 4 easy steps to making it:

Romesco sauce is a sauce made with processing sandwich bread, almond slices, red peppers, sherry vinegar, with spices in a food processor. In my opinion, the secret to really good romesco sauce is using lightly toasted almond slices.To toast sliced almonds, all you have to do is to heat them in a non-stick skillet in medium heat for 10 minutes or so. Keep a close eye on them as they can burn easily.

The original sandwich was served with a salad that was similar to coleslaw. I made my coleslaw with a couple of tablespoons of vegenaise, because I wanted my sandwich to be vegan. But if you don’t have it and you are not vegan, feel free to substitute it with mayonnaise or a combination of mayonnaise and yogurt, for lighter calories.
My secret ingredient to delicious coleslaw is celery seeds. They not only give it a distinctive flavor, but also add a nice crunch to the overall salad.

I looked for many recipes to figure out how to make cauliflower steaks. Most of them suggested searing them in a skillet first, and then letting them roast in the oven for a short amount of time. I am sure it would be great to do it that way, but I choose to only sear them in a skillet and skipping the time in the oven. Because I didn’t want it to be a long process with several steps. And it worked perfectly. It took 8-10 minutes in medium heat on each side for them to soften and become tender.

It was fairly easy to assemble the sandwich. Below is a quick stop-motion video for you to watch how I assembled it.

If you have an electric grill (like George Forman), you can press them for a couple of minutes to warm them up. This step is an optional step, but if you have it I recommend not skipping it, as in my opinion, warming it up takes it to a whole other level.

Finally, if you are calorie-conscious and prefer not to eat too much bread, instead of eating both halves of the bread you can also make these as open-faced sandwiches.

By Aysegul Sanford
Yields: 4 2 large or 4 small sandwiches
Prep Time: 15 mins
Cook Time: 15 mins
Total Time: 30 mins
A vegan Cauliflower Steak Sandwich with romesco sauce. Simply put, a head of cauliflower sliced into “steaks”, sauteed in a pan, placed on a sandwich bread smeared with homemade romesco sauce and coleslaw. This easy vegan sandwich recipe is a great sandwich if you are looking for something healthy and delicious. 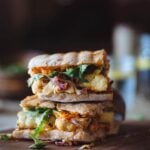 For The Romesco Sauce

For The Vegan Coleslaw

For The Cauliflower Steak Sandwich

To make the romesco sauce:

To make the coleslaw:

The recipe for the romesco sause is adapted from The Cook’s Illustrated Cookbook.

This website uses cookies to improve your experience while you navigate through the website. Out of these cookies, the cookies that are categorized as necessary are stored on your browser as they are essential for the working of basic functionalities of the website. We also use third-party cookies that help us analyze and understand how you use this website. These cookies will be stored in your browser only with your consent. You also have the option to opt-out of these cookies. But opting out of some of these cookies may have an effect on your browsing experience.
Necessary Always Enabled
Necessary cookies are absolutely essential for the website to function properly. This category only includes cookies that ensures basic functionalities and security features of the website. These cookies do not store any personal information.
Non-necessary
Any cookies that may not be particularly necessary for the website to function and is used specifically to collect user personal data via analytics, ads, other embedded contents are termed as non-necessary cookies. It is mandatory to procure user consent prior to running these cookies on your website.
SAVE & ACCEPT
432 shares