The title may say Skillet Roast Chicken with Parsnip and Fennel, but this is more than a recipe. It is a technique perfected to make the most flavorful and moist chicken every time. Whole chicken lightly browned in a cast-iron skillet and roasted on a bed of vegetables. 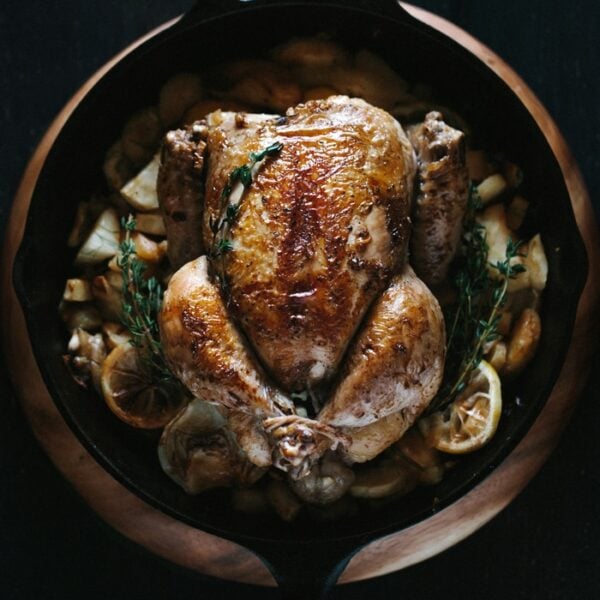 Lately, roast chicken has been my go-to dish. I love it, because it is somewhat easy to put together and requires very little hands on time for such a beautiful end product that takes care of dinner for a couple of nights in our household. This recipe is a combination of several recipes and techniques that I tried and perfected over the last couple of months.

Prior to finding this method, I always had the same issue with roasting chicken: breast meat that was dry and flavorless. The problem was that after being exposed to a really high temperature in the oven, the breast meat would cook much earlier than the other parts, which resulted in most of the moisture being drawn out of the meat.

To prevent that, I tried some popular methods like rotating the bird in the middle of the process, browning it beforehand and continue with roasting it in lower temperatures, etc. But for some reason, none of those methods gave me what I was looking for.

Finding a Technique That Works

The solution came from America’s Test Kitchen (aka ATK). What they did was to roast the chicken in a pre-heated hot skillet for half an hour in a 450-degree oven (which is higher than many recipes suggest), then turn the oven off, and let the bird continue to roast for another 30 minutes or so. Turning off the oven when the meat was halfway roasted allowed the chicken to finish cooking gently without drying out.

I tried this technique and it was magical. While the breasts were moist and soft, the rest of the chicken was roasted perfectly. The only thing that I didn’t like was the fact that the skin wasn’t as crisp as I would have liked. When I looked into it, I found that there were many ways to get a super crisp skin. Brining the chicken for an hour was the most popular method. But, I didn’t want to wait for an hour. Another popular method was drying the bird using paper towels and letting it air-dry (some people even suggested putting it in front of a fan) on the kitchen counter. Once it was thoroughly dried, they seasoned it with a little bit of oil and salt and pepper. And that was what I did.

As I was thinking about incorporating some vegetables into the recipe, I had to alter the technique of the ATK a little bit. Since I wanted to line the bottom of the pan with vegetables, I had to find a way to jump-start the roasting process. To do that, I browned both sides of the chicken on the stove for a couple of minutes. I transferred it on a plate while pre-cooking the vegetables to bring out their flavors. Then I placed the browned chicken on top of the vegetables (with all of its juices) and put it in the oven. I roasted it for 30 minutes, turned the oven off, and let it continue roasting for another 25-30 minutes. At the end, the chicken was evenly roasted and the vegetables, infused with the juices of the chicken, were tender and flavorful.

In terms of vegetables, I used parsnips, fennel, shallots, and lemon. But really, you can use any vegetable combination you like. Other options like carrots, potatoes, and onions would also work just as well.

By Aysegul Sanford
Yields: 6 servings
Prep Time: 30 mins
Cook Time: 1 hr 30 mins
Total Time: 2 hrs
The title may say Skillet Roast Chicken with Parsnip and Fennel, but this is more than a recipe. It is a technique perfected to make the most flavorful and moist chicken every time. Whole chicken lightly browned in a cast-iron skillet and roasted on a bed of vegetables. 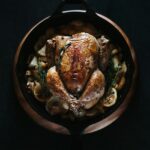 The inspiration for using parsnips and fennel as vegetables came from this recipe.

This website uses cookies to improve your experience while you navigate through the website. Out of these cookies, the cookies that are categorized as necessary are stored on your browser as they are essential for the working of basic functionalities of the website. We also use third-party cookies that help us analyze and understand how you use this website. These cookies will be stored in your browser only with your consent. You also have the option to opt-out of these cookies. But opting out of some of these cookies may have an effect on your browsing experience.
Necessary Always Enabled
Necessary cookies are absolutely essential for the website to function properly. This category only includes cookies that ensures basic functionalities and security features of the website. These cookies do not store any personal information.
Non-necessary
Any cookies that may not be particularly necessary for the website to function and is used specifically to collect user personal data via analytics, ads, other embedded contents are termed as non-necessary cookies. It is mandatory to procure user consent prior to running these cookies on your website.
SAVE & ACCEPT
580 shares