A lightened up version of Crispy Cheddar Chicken recipe we all love. It is made healthier with panko-cheddar crumb and baked in the oven for perfection. Ready in less than an hour, this ultra-flavorful crispy baked chicken recipe is guaranteed to be a family favorite. 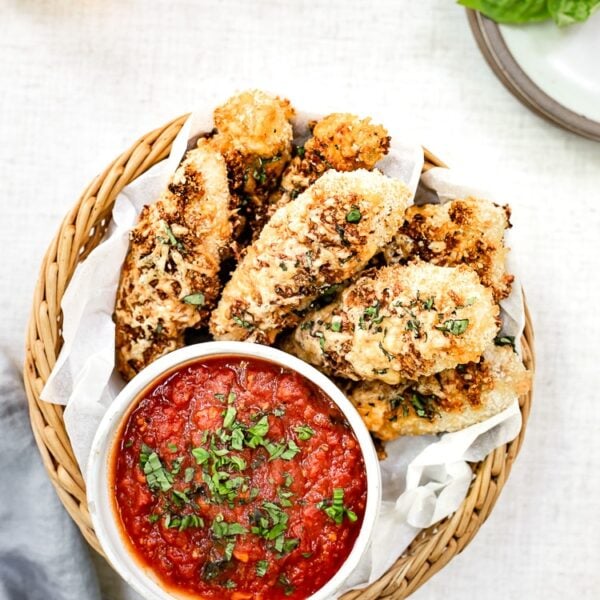 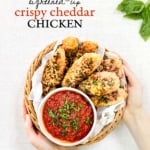 This post has been sponsored by Tillamook. As always, all opinions are my own.

I have to admit, I have a soft spot when it comes to any food that has crunchy or crispy attached to its name. Sadly, we all know that not all crunchy and crispy are created equal. In most cases, for food to have the ability to make that heavenly sound with every bite, you need to incorporate a considerable amount of fat into the recipe. While I have nothing against fat and know that it is essential for us to survive, I believe everything should be consumed in moderation.

Before I go into the details of my version of Crispy Cheddar Chicken recipe, please know that I am very much aware that most people are accustomed to making this American classic with supermarket cracker crumbs. I know how great chicken tastes when it is coated and baked with buttery and salty crackers. I made it that way more times than I can remember and have nothing against it.

However, I have been looking for a healthier way of making Crispy Cheddar Chicken and I am here to tell you that after weeks of recipe testing, I got it. This recipe is not only made in a much healthier way, but also just as good as its version made with buttery supermarket crackers.

Want to know how? Read on…

The recipe has 4 folds:

Intrigued yet? Allow me to break it down for you:

The Crunch Factor – AKA Panko and Cheddar Mixture:

If you are reading this and thinking to yourself, “what the heck is panko?” allow me to explain:

Panko is a Japanese-style breadcrumb that is made from bread without crust. Compared to regular breadcrumbs, it has a more coarse and flaky texture, which makes it much lighter and crispier. With panko, there are more “flakes” than “crumbs” with a larger surface area than breadcrumbs.

In our case here, initially those flakes were a problem, mainly because they were large. In other words, they were too big to stick to the chicken. To simulate the effect of buttery crackers, I had to find a way to make them smaller. The operative word here being “smaller”, not small.

The answer came from a recipe I found on Cook’s Illustrated Magazine. They used panko for another recipe that needed a little bit of lightning-up, but the crumbs were too big to stick to the food. The idea of pulverizing the crumbs in a food processor was out of question as they needed them just a little smaller, not in powder form.

To achieve that, they placed panko into a plastic bag, pressed and sealed tightly to get the air out, and broke the large pieces apart by rolling back and forth a few times using a rolling pin. This way, the Panko crumbs broke into smaller pieces without turning into dust.

The Secret To Out-of-This-World Panko-Cheddar Crust

In my first try, I followed in the footsteps of Cook’s Illustrated magazine and mixed panko with cheddar. I dipped the chicken into the egg whites, coated with the panko mixture and baked it in the oven.

The result: Crispy chicken with no flavor.

The issue was that even with a very flavorful cheese like sharp cheddar, it ended up being bland. My crisp agent, aka panko-cheddar mixture, needed some serious seasoning. After a few trials and errors, sticking to good ol’ salt and pepper and enhancing it with garlic and onion powder was the secret to the out-of-this-world panko-cheddar crust.

In terms of cheddar, I used one of Tillamook’s cheddar loafs.

If you are living in the West Coast you are probably familiar with their products. Having lived in the East coast all my life I have heard so much about them yet never got a chance to try their products until recently.

Luckily for us East Coasters, they are launching their cheddar cheese nationwide. I was fortunate enough to experiment with the assortment of their cheddar in the last few weeks and I have to say every one of them were superb.

In this cheddar chicken recipe, I used their sharp cheddar. Not only it worked perfectly, but also elevated it to the next level making my panko-cheddar coating very flavorful.  What I love about their products is that they are made with all natural ingredients and with milk that is not treated with artificial growth hormones so you can feed your family without any worry.

Picking The Right Chicken for The Best Cheddar Baked Chicken

The last hurdle in my recipe testing process was finding the best chicken part to use for my crispy baked chicken recipe.

On my first try, I followed in the footsteps of the authors behind the most popular crispy cheddar chicken recipes that I found on the internet and used chicken breasts.

They all did the same thing: Sliced chicken breasts lengthwise to create thinners strips that can be easily dippable into the egg and panko mixture.

While the results were okay, I wasn’t a big fan of the “crispy” to chicken-meat ratio. I don’t know about you, but with a recipe like this I prefer more of the crispy than the meaty.

The answer to my ratio problem came from my husband (of all people). I sent him to the store to get chicken breast, but he mistakenly picked up chicken breast tenderloins. To be quite honest, I had no idea that chicken breast and chicken tenderloins were two different things. Come to find out, they are.

“The chicken breast is the meat attached to the ribs. It can be boneless with the ribs removed. The chicken tender or tenderloin, is a strip of breast meat, that is part of the breast but that is not really connected so that it can be separated and used as it is.”

After giving a try to what I initially thought as the “wrong chicken”, I found out that the chicken tenderloins were thin enough for me to use them as an agent for my crispiest cheddar chicken goals giving me the ideal ratio of crunch to meat. Plus, they were naturally stripped.

With this being said, if you can’t get your hands on chicken breast tenderloins, you can use chicken breasts. It will still be good. Additionally, if you are serving this to your kids and want to turn it into cheddar chicken bites, you can do so by slicing the strips into small chunks and coating them with eggs and panko mixture.

The assembly part is easy. You first dip your chicken into the egg whites and then coat it with the panko-cheddar mixture. At this point, you may have to gently press the coating onto the chicken to make sure that it sticks. Then place it onto a parchment-lined baking sheet. Once all chicken tenderloins are assembled, you are more than welcome to top them off with a little bit more cheddar. As far as I know, no one died from more cheddar goodness. S

By Aysegul Sanford
Yields: 4 servings
Prep Time: 15 mins
Cook Time: 40 mins
Crispy Cheddar Chicken recipe made healthier with panko-cheddar crumb and baked in the oven for perfection. Ready in less than an hour, it is guaranteed to be a family favorite. 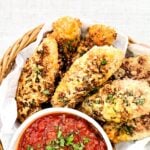 To Serve with (optional):

This website uses cookies to improve your experience while you navigate through the website. Out of these cookies, the cookies that are categorized as necessary are stored on your browser as they are essential for the working of basic functionalities of the website. We also use third-party cookies that help us analyze and understand how you use this website. These cookies will be stored in your browser only with your consent. You also have the option to opt-out of these cookies. But opting out of some of these cookies may have an effect on your browsing experience.
Necessary Always Enabled
Necessary cookies are absolutely essential for the website to function properly. This category only includes cookies that ensures basic functionalities and security features of the website. These cookies do not store any personal information.
Non-necessary
Any cookies that may not be particularly necessary for the website to function and is used specifically to collect user personal data via analytics, ads, other embedded contents are termed as non-necessary cookies. It is mandatory to procure user consent prior to running these cookies on your website.
SAVE & ACCEPT
460 shares