This Catalan Style Spinach is a fantastic Spanish Tapas dish, that is quick and easy to make. Flavored with tomatoes, pine nuts, and raisins, it is a flavor-packed dish that is guaranteed to impress. 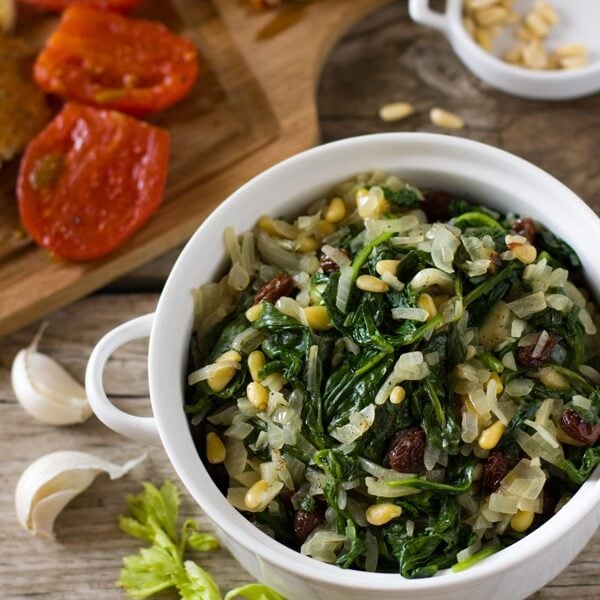 Lately, we are having our dinners, out in our balcony. I do not mean to brag about it, but our balcony is looking over to the Atlantic Ocean. There is always a nice breeze coming from the ocean.

Believe me, in the hot, “always summer” days of the Caribbean Islands, you need this kind of breeze in your life.

Sometimes we open a bottle of wine and just enjoy it while listening to the sound of the ocean. To accompany our “Ocean Breeze and Wine” evenings, lately, I have been experimenting on making several small dishes instead of a big-meal dinner.

My husband loves it, especially because he comes home pretty late from work and does not want to have a heavy meal at that time of the day.

Why I love this simple Spanish spinach recipe:

I love this small dish because it is:

When I think about small dishes, I either look for tapas, Spanish appetizers, or meze, Middle Eastern appetizers. Both cuisines are full of Mediterranean flavors like olive oil, tomatoes and fresh herbs.

How To Make This Catalan Spinach Recipe

As I mentioned earlier, this Catalan Style Spinach is a fantastic Spanish Tapas dish, that is quick and easy to make. When I say quick, it is really quick. Simply:

More About Catalan and Catalan Recipes.

When I google’d “Catalan”, I found out that Catalonia is in the Northeast part of Spain and they are known with their distinctive cuisine called “Cuina Casalona”.

One thing that they are famous for is to squash a tomato, spread it on a slice of bread and drizzle it with extra virgin olive oil. They call this “Pan con Tomate” and it is served everywhere with everything.

The world renowned Chef José Andrés, invented this spinach dish and named it Catalan-Style Spinach because he believes that this dish demonstrates the Catalonian penchant for making savory food sweet with the addition of dried fruits.

If you are not familiar, he is credited as the chef who brought the “small dishes dining” concept to the U.S. and owns several restaurants in several U.S. cities.

By Aysegul Sanford
Yields: 4 servings
Prep Time: 10 mins
Cook Time: 10 mins
Total Time: 20 mins
This Catalan Style Spinach is a fantastic Spanish Tapas dish, that is quick and easy to make. Flavored with tomatoes, pine nuts, and raisins, it is a flavor-packed dish that is guaranteed to impress. 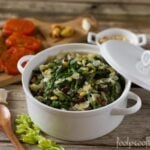 This dish can be served both warm or cold.

This recipe post was published in August 2013 while we were living on a small Caribbean island. It has been updated in June 2020 with additional helpful information and with no changes to the originally published recipe.

This website uses cookies to improve your experience while you navigate through the website. Out of these cookies, the cookies that are categorized as necessary are stored on your browser as they are essential for the working of basic functionalities of the website. We also use third-party cookies that help us analyze and understand how you use this website. These cookies will be stored in your browser only with your consent. You also have the option to opt-out of these cookies. But opting out of some of these cookies may have an effect on your browsing experience.
Necessary Always Enabled
Necessary cookies are absolutely essential for the website to function properly. This category only includes cookies that ensures basic functionalities and security features of the website. These cookies do not store any personal information.
Non-necessary
Any cookies that may not be particularly necessary for the website to function and is used specifically to collect user personal data via analytics, ads, other embedded contents are termed as non-necessary cookies. It is mandatory to procure user consent prior to running these cookies on your website.
SAVE & ACCEPT
472 shares