Vegan Beet Smoothies recipe: With colder months and flu season approaching we need all the nutrients we can get. Beets are high in immune-boosting vitamin C, potassium, magnesium and other nutrients. These vegan beet smoothies are made with colorful beets, coconut milk, and leafy greens like spinach and kale. Mix and match as you please. I can’t imagine a healthier way to start your day. 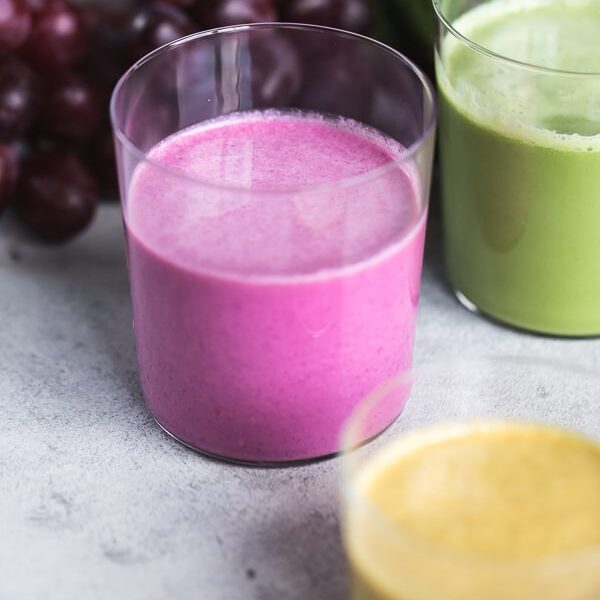 I had no intentions of sharing a beet smoothie recipe until I saw these colorful beets in our farmer’s market last week. I do not usually buy beets that much because my husband does not like them. But these ones were too pretty to pass up. So I bought a bunch with no recipe in mind. I thought I would roast them with a little olive oil and salt and pepper; mix with goat cheese and walnuts and treat myself to a simple dinner.

But then I saw a smoothie recipe using red beets. Even though I have tried this Beet Juice recipe before, I had never used beets in a smoothie before. So the next morning I put a small red beet in my usual morning smoothie that I make with almond milk, frozen bananas, and baby spinach.

To my surprise, it was not bad at all. The next day, I tried it with a yellow beet. Unlike the smoothie that I made with the red beet, it tasted much more earthy and beet-like. This time it was more like the strong taste of the yellow beet took over the whole smoothie.

A couple of days later, I went back to the kitchen and this time I used coconut milk instead of almond. I also added some grapes to make it a little sweeter. Unlike it was in my first try, the taste of beets didn’t take over the whole smoothie. It was much more balanced. In the following days, I tried different versions of the same smoothie with and without baby spinach and kale. I also combined two different colored beets. They were all so good. Coconut milk was definitely a better option than almond milk.

About this beet smoothie recipe:

As I mentioned earlier, you can mix and match as you please. If you make it with red beets and no greens, it has a pretty pink color and it tastes very much like a cow-milk based milkshake. If you make it with yellow beets, you can swap the grapes with pineapple. Both fruits complement yellow beets well. You can also add a cup of baby spinach or kale to make it even more nutritious.

These smoothies are such a good way of getting raw beets in your diet. They are high in immune boosting vitamin C, potassium, manganese, and fiber. They also have anti cancer properties. As I was researching for this post, I found out that you could eat their green leaves as well. Come to find out, they are just as, if not more, nutritious. I had no idea that they were edible. Apparently, a lot of people chop them up and sauté them with onions and other vegetables and serve them as a side dish. Unfortunately, I had already thrown them away, but I know next time I will make sure to use them in my cooking.

By Aysegul Sanford
Yields: 2 glasses
Prep Time: 10 mins
Total Time: 10 mins
This beet smoothie is one of my all-time superfood smoothies. Made with coconut milk, it is delicious, healthy and satisfying. 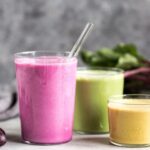 This website uses cookies to improve your experience while you navigate through the website. Out of these cookies, the cookies that are categorized as necessary are stored on your browser as they are essential for the working of basic functionalities of the website. We also use third-party cookies that help us analyze and understand how you use this website. These cookies will be stored in your browser only with your consent. You also have the option to opt-out of these cookies. But opting out of some of these cookies may have an effect on your browsing experience.
Necessary Always Enabled
Necessary cookies are absolutely essential for the website to function properly. This category only includes cookies that ensures basic functionalities and security features of the website. These cookies do not store any personal information.
Non-necessary
Any cookies that may not be particularly necessary for the website to function and is used specifically to collect user personal data via analytics, ads, other embedded contents are termed as non-necessary cookies. It is mandatory to procure user consent prior to running these cookies on your website.
SAVE & ACCEPT
332 shares