Swap the rice noodles with sweet potato “noodles”, add some other superfoods like ginger, garlic, unsweetened peanut butter, lime juice and tamari and enjoy a healthier version of a classic dish we all love. My version of Sweet Potato Noodle Pad Thai is vegan and gluten-free for everyone to be able to enjoy. Need a visual? be sure to watch the quick how-to video below. 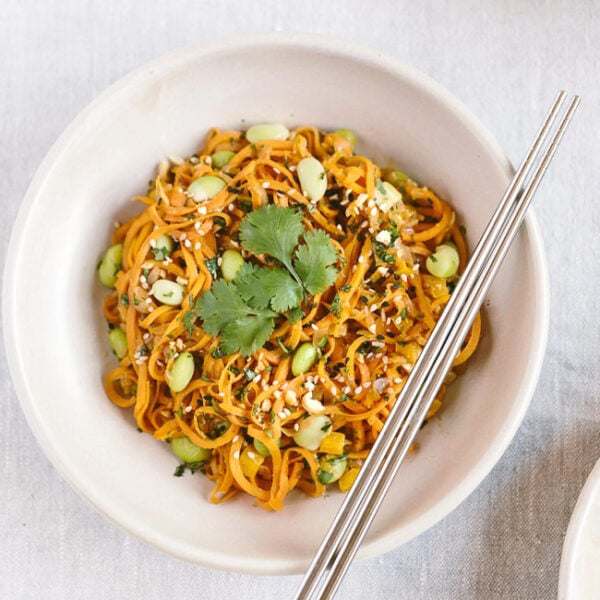 I will be the first one to admit. I have been very late to get on the wagon for spiralized recipes. There are two reasons for that.

First, I did not want to share recipes that require my readers to have a piece of special equipment. Like it is in this Sweet Potato “Noodle” Pad Thai recipe, to make it, you need a hand-operated machine called vegetable spiralizer. I did not want to make people have to go out and get a machine to make a recipe of mine.

But then one day, while I was shopping at our local Whole Foods, I saw that they were selling already spiralized vegetables. At that point, I realized it was about time that I got on board, invest in a spiralizer, and start sharing recipes on the blog. This was back in October.

You may rightfully ask, October was almost 4 months ago, why did it take so long to share your first recipe?! The answer to this question is my second reason. In my first spiralizing attempt of turning a sweet potato into noodles using my new toy, I cut my finger with the ultra-sharp noodle blade so badly that I had to wait close to a month for it to heal. It was totally my fault as I wasn’t paying attention to what I was doing.

As a result, a piece of my middle finger became a part of our sweet potato noodles. I apologize for the nasty visual. However, if you decide to purchase a spiralizer, I think it is important to warn you to be very careful when operating it, especially if it is your first time. This thing turns super hard vegetables into beautiful noodles because of its super sharp blades. I do not have kids, but if I did I would not allow them anywhere near this machine.

With all that being said, I have been playing with my spiralizer since the beginning of this year and I now know why it has been so popular. Being able to turn vegetables like zucchini, beets, sweet potatoes, carrots, parsnips, etc. into noodles and use them like you would use spaghetti has been pretty awesome.

Even my husband, who is not much into cooking, thought that the possibilities were endless. And guess what? It doesn’t end in there. Depending on your Spiralizer, most of them come with other attachments that turn vegetables into noodles similar to wide white pasta like pappardelle or super thin pasta like angel hair.

The moral of the story: This machine is awesome and you can do so much with it. However, if you do not want to purchase one and want to make dishes like this recipe, you can find already spiralized vegetables in supermarkets. If you do decide to invest in one, be very careful using it as its sharp blades are no joke.

For the record, the one I am using is Paderno World Cuisine A4982799 Tri-Blade Vegetable Spiral Slicer. I purchased it after Cooks Illustrated magazine reviewed a bunch of them and named this one as the best spiralizer back in May 2016. As in most things that they recommend, this one did not disappoint. It is easy to use, clean, and fairly inexpensive, $22.99 on Amazon at the time of this writing.

Now on to the recipe…

The one ingredient in this list that you might not be familiar with is tamari. I know I wasn’t until I read it on Amy Chaplin’s At Home in the Whole Food Kitchen cookbook a few years ago. In her book, she used it a lot along with Shoyu (soy sauce). Both tamari and soy sauce are made with soybeans. Though the concentration of soybeans in tamari is more than soy sauce.

In addition, in Amy’s words (on page 26), “Shoyu (soy sauce) is fermented with wheat, while tamari is wheat and gluten-free, but they both add a wonderful warmth and depth of flavor to savory food.”

Since I wanted to this recipe to be both vegan and gluten-free, I used tamari instead of soy sauce. However, if you are not gluten sensitive and/or only have soy sauce on hand feel free to use that instead.

Here I have to mention, in my experience tamari is less salty than soy sauce. Therefore, I recommend tasting the sauce before adding more salt to it. If you are wondering, I use this naturally fermented San J Tamari Soy Sauce.

As you will see in the recipe below, there are few ingredients to chop and get ready for the dressing. Plus, if you are not purchasing already spiralized noodles, you need to spiralize the sweet potatoes. Even though these two components of the recipe do not take too much time, I know some of you prefer a faster weeknight dinner. For that reason, you can prep both the sauce and your veggies a day or two in advance.

As a matter of fact, I recommend doing that especially for the dressing as while it is sitting in the fridge in an airtight container, all of the flavors get a chance to develop making the end result truly delicious. In the same way, you can prep the sweet potato noodles a day in advance, place in a plastic bag, let the air out as much as you can, and keep in the fridge until you are ready to use it.

Finally, if you have any leftovers, place them in an airtight container and place it in the fridge. They make the best lunch the next day. 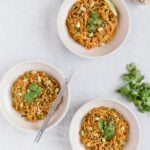 For the Pad Thai:

* If you are not gluten-sensitive you can use soy sauce instead of tamari, but make sure to taste the dressing before adding more salt to it. For more information on this, please read the blog post. * If you have any leftovers, place the pad thai in an airtight container and keep it in the fridge upto 2 days. *Want to make it ahead? Give a read to the blog post to find out how to do so.

This website uses cookies to improve your experience while you navigate through the website. Out of these cookies, the cookies that are categorized as necessary are stored on your browser as they are essential for the working of basic functionalities of the website. We also use third-party cookies that help us analyze and understand how you use this website. These cookies will be stored in your browser only with your consent. You also have the option to opt-out of these cookies. But opting out of some of these cookies may have an effect on your browsing experience.
Necessary Always Enabled
Necessary cookies are absolutely essential for the website to function properly. This category only includes cookies that ensures basic functionalities and security features of the website. These cookies do not store any personal information.
Non-necessary
Any cookies that may not be particularly necessary for the website to function and is used specifically to collect user personal data via analytics, ads, other embedded contents are termed as non-necessary cookies. It is mandatory to procure user consent prior to running these cookies on your website.
SAVE & ACCEPT
9164 shares