This Turkish Borek Recipe explodes with sumptuous Middle Eastern/Mediterranean flavor. Flaky, creamy, and filling, this cheese borek combines crisp phyllo dough with tangy feta cheese and tender spinach for one of my most pairable Turkish recipes.

Serve this savory pastry as a mouthwatering side for any dish that goes with bread, from Piyaz to Turkish Meatballs. You can even enjoy it alongside my Turkish Coffee recipe and Simit for a five-star Mediterranean breakfast. 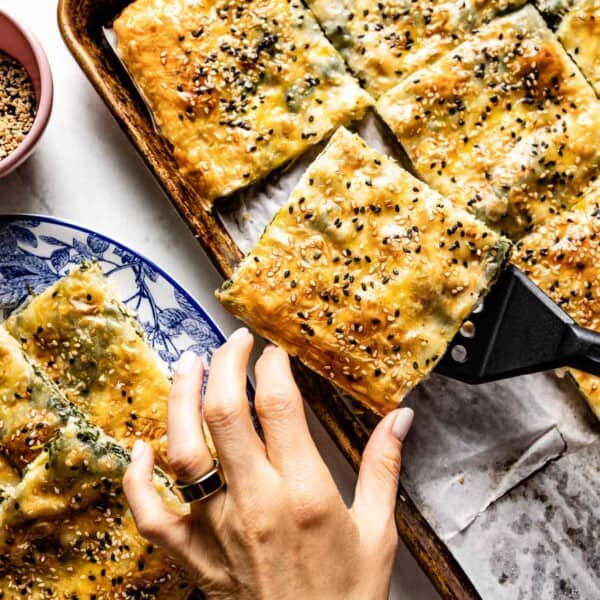 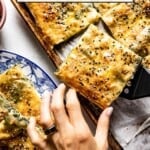 Crisp and rich, borek is a savory Turkish pastry often served at breakfast and brunch. It’s made by layering ultra-thin dough, an egg mixture, and various fillings. Borek also comes in many shapes and sizes, ranging from cigarette-shaped rolls to large trays.

Traditionally, chefs prepare borek with Turkish yufka dough, an ultra-thin, unleavened dough made from flour, water, and salt. Yufka pastry leaves recipes—like borek—often use layers of a yogurt or milk mixture to keep the dough equally moist and flakey.

Although feta and spinach borek is a quintessential Turkish dish, you can find Turkish borek recipes across the former Ottoman Empire. The Balkans, Eastern Europe, and even Northern Africa are just a few places. Perhaps because of the pastry’s geographic range, its name has many alternate spellings. “Bourek,” “burek,” “börek,” and even “bòrek” are all popular variations.

Table of Contents show
What is Borek?
Recipe Ingredients
How to Make Borek with Spinach
What to Serve with Borek
How to Make Ahead, Store, and Freeze
Filling Variations
Expert Tips
FAQs
Other Turkish Recipes You Might Like:
Spinach and Feta Cheese Börek – Turkish Borek Recipe

Who knew authentic Turkish cuisine could be so easy to make? This spinach borek recipe only uses simple ingredients that you can find at your local grocery store.

How to Make Borek with Spinach

Sheet pan borek is one of my recipe book’s tastiest and most effortless Turkish side dishes. You can learn how to make borek like an expert in just a few simple steps.

Cook the Vegetables & Make the Filling

What to Serve with Borek

There’s a reason why so many people call it “borek bread.” This flaky and flavorful Turkish side makes a perfect pair with any dish you’d eat with bread, from light salads to meaty mains.

How to Make Ahead, Store, and Freeze

Make meal prep stress a thing of the past with this Turkish cheese borek recipe. Whether you make this dish a day or an entire month in advance, these storage tips have you covered.

The sky’s the limit when it comes to filling this Turkish cheese pastry. Whether you want a borek recipe with meat or a cheese burek for feta fans, these popular fillings are just what you need.

You don’t have to be a master chef to make international eats. With these foolproof tips, your cheese and spinach borek will come out flaky, gooey, and decadent every time.

You don’t have to be Turkish to be a borek buff. This handy FAQ will answer all your questions about my recipe for Turkish borek, from the dish’s national origins to its nutritional content.

Is borek the same as spanakopita?

Is it burek or borek?

Both spellings of this pastry are technically correct, depending on the country. Turkish people tend to spell the name as “borek,” while “burek” is more common in the Balkans.

What countries have burek?

Many may think of borek as Turkish food. However, you can find this iconic dish in numerous countries across the former Ottoman Empire. This area includes countries in the Balkans, Middle East, and Northern Africa.

This recipe for burek with cheese isn’t the healthiest, with many calories coming from fats and carbs. However, borek can provide essential nutrients from its vitamin-rich spinach and calcium-rich feta when enjoyed in moderation.

How do you eat borek?

Traditionally, people have Turkish cheese borek for breakfast or brunch during family gatherings. However, you can eat borek alongside any meal in place of bread.

If you try this Turkish Borek recipe or any other recipe on Foolproof Living, please take a minute to rate the recipe and leave a comment below. It is a great help to others who are thinking of making the recipe. And if you took some pictures, be sure to share them on Instagram using #foolproofeats so I can share them on my stories.

By Aysegul Sanford
Yields: 12 slices
Prep Time: 30 mins
Cook Time: 35 mins
Total Time: 1 hr 5 mins
Learn how to make Spinach and Feta Cheese Borek – A classic Turkish Borek recipe made with stuffing phyllo sheets with spinach and feta. This authentic and simple recipe can be made ahead and baked right before serving for a warm and delicious breakfast or brunch recipe. 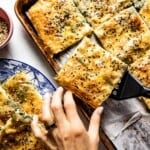 For the Spinach and Feta filling:

For The Milk Yogurt Mixture: 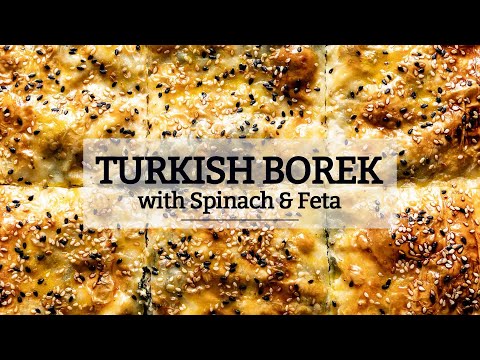 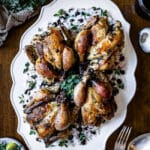 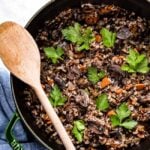 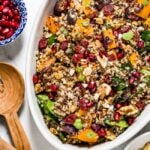 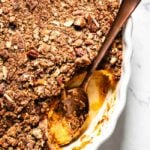 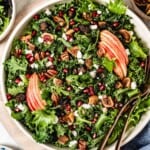 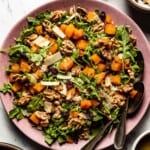 This website uses cookies to improve your experience while you navigate through the website. Out of these cookies, the cookies that are categorized as necessary are stored on your browser as they are essential for the working of basic functionalities of the website. We also use third-party cookies that help us analyze and understand how you use this website. These cookies will be stored in your browser only with your consent. You also have the option to opt-out of these cookies. But opting out of some of these cookies may have an effect on your browsing experience.
Necessary Always Enabled
Necessary cookies are absolutely essential for the website to function properly. This category only includes cookies that ensures basic functionalities and security features of the website. These cookies do not store any personal information.
Non-necessary
Any cookies that may not be particularly necessary for the website to function and is used specifically to collect user personal data via analytics, ads, other embedded contents are termed as non-necessary cookies. It is mandatory to procure user consent prior to running these cookies on your website.
SAVE & ACCEPT
6997 shares